This morning, at a press event in midtown New York City, Nintendo and the American Heart Association announced a strategic alliance aiming to promote general health awareness among gamers.

Nintendo and the AHA, together.

The AHA logo will find its way to copies of Wii Fit Plus, Wii Sports Resort and the box the Wii comes in and likely future titles as well.

Nintendo and the AHA launched a website today, www.activeplay.com, and on it the two companies stress the importance of this alliance, especially at this time, when, according to The Journal of the American Heart Association, nearly 70 percent of Americans do not get the recommended levels of physical activity per week. 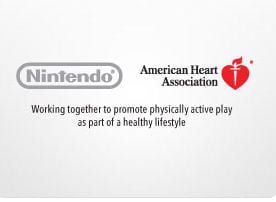 The website, or an advertorial, depending on how you look at it, expresses the importance of getting “informed,” “empowered” and “active.”

If you’ve got a sharp mind, you’ll remember Nintendo revealed the Wii Vitality Sensor last year at E3 2009. Nintendo, to this day, has not clarified or elaborated whatsoever as to what the product is or what it will become, but it’s likely that with this new partnership between the AHA and Nintendo, its purposes will show itself.