Playing board games, surrounded by family and friends at the dinner table was a highlight of my youth. But for my (potential) kids, that dinner table might be the living room floor.

Electronic Arts and its EA Play Label, today announced Hasbro Game Night 3, the third installment of the digital board game series and one that will see popular titles Twister, LIFE, Clue, Mouse Trap and Yahtzee Hands Down, make their way to the digital world. 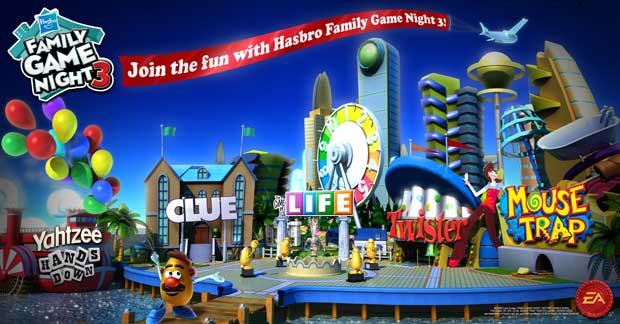 Mr. Potato Head leads the cheers and reprises his role as “host and park guide,” and with Toy Story 3 looming on the horizon, the potato man has a lot on his figurative plate.

“This third installment in the successful HASBRO FAMILY GAME NIGHT video game series delivers another great lineup of time-tested favorite Hasbro game brands and uses online play to take the entertainment and competition to an entirely new level,” said Mark Blecher, Senior Vice President and General Manager of Digital Media and Gaming at Hasbro. “No longer will travel distance be a hurdle for families and friends to get together and have some fun.”

Up to four players can take part in each title and, for the first time, players can use their Miis and Avatars in the Wii and Xbox 360 versions respectively.