The motion-control era Nintendo ushered in with its revolutionary Wii console extends to Microsoft and its Xbox 360 this October when Project Natal arrives for the system, if a marketing man is to be believed.

“I do have great news to share with everybody that Project Natal will be launched in Saudi Arabia and in the world that is going to be somewhere in October,” Tariq said, later confirming a more concrete date to be set at E3 next month in Los Angeles. 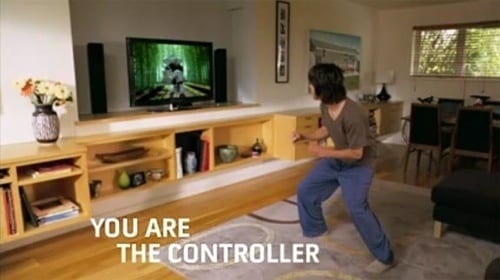 The controller? That's you!

Now, this news doesn’t come straight from Microsoft headquarters, but it’s from the mouth of a Microsoft marketing guy, and whether he’s Microsoft Saudi Arabia or not, he’s a Microsoft employee.

Additionally, this news seems to make sense, as an October release would give Microsoft enough time to push its product before the wild Holiday rush.

And it falls in line with what Fable III voice actor Jonathon Ross Tweeted a while back. Missed his quote? Here’s what he said (spelling errors are his, not mine).

“OK. Before bed. Natal on X Box impressive. Not quite there yet i think but tye have til october and if they get it right…skys the limit.”

Expect lots more details about Project Natal, and hopefully a actual working title for the tech, at E3 in June.