When we first heard of it, it seemed Ezio’s latest adventure, in Assassin’s Creed: Brotherhood, would be heavily directed at adding multiplayer to the long-standing and proven stealth genre, but today we learn Brotherhood is a fully-fleshed, proper Assassin’s game.

Work on the game is led by Ubisoft Montreal but other Ubi studios, those in Singapore, Bucharest, Qu©bec City and Annecy are lending their hands to the game as well. The Annecy team, most famous for their work on multiplayer in Splinter Cell: Chaos Theory, are handling development of the game’s multiplayer. 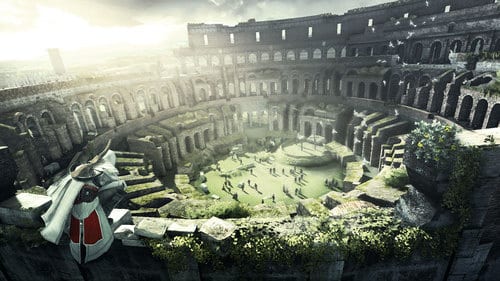 According to the press release, in Brotherhood, Ezio is now a Master Assassin, and the fight will be fought in Italy’s greatest city, Rome. But this time, Ezio can’t do it alone. He’ll “command an entire Brotherhood that will rally to his side.” And the fact sheet goes on to say “only by working together can the Assassins defeat their mortal enemies.”

As for multiplayer in the game, a first for the franchise, you’ll be able to choose from a set of characters, each with their own signature weapons and assassination moves and compete against players from throughout the world in a variety of game-types. Sadly, no additional, more specific information was given.

More information on the title is promised to be in the June issue of the Official PlayStation Magazine on shelves June 1.