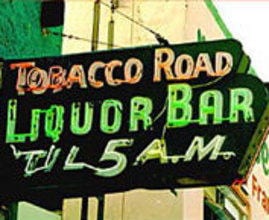 MIAMI — Sixteen years ago, a well-known Florida artist, Antonia Gerstacker, painted the black and red sign on a unique light-blue background that hangs outside Tobacco Road, the oldest bar in Miami. This grizzled bar first opened in 1912, the same year the Titanic sank and New Mexico and Arizona were admitted as states to the Union. Tobacco Road offers much to its many patrons: remarkable meals, a distinctive environment, almost a century of history, and, most important: nothing less than a good time.

The Congress of the United States passed the 18th amendment into law on January 16, 1920, a well-intentioned but ultimately ill-advised law that forbid the buying, selling and consuming of alcoholic beverages in this country.  The wise owners of Tobacco Road refused to let the law affect their business, and responded by redesigning the bar specially for this unfortunate period, one that lasted thirteen years before it was repealed. This unique joint has several concealed doors and ladders that would redirect workers to the hidden alcohol they would stock for their costumers.  Rumor has it that on the second floor of the building,  there was the best cabaret in town.  Amazingly, the public thought that this alcohol supplier was a bakery.

The food is incredibly cheap and appetizing, varying according to what day of the week it is:  Tuesdays there is the Maine Lobster special; Wednesdays, costumers fill up with â€˜all you can’ eat BBQ-Ribs; and Thursdays the week ends with a 16 oz. T-bone steak that is to die for.  All of these specials come with a minimum of two drinks ensuring that the evening spent there is even more pleasant.  The bar also offers a big selection of beer, liquor and wine with fairly decent prices and generous servings.  A very special characteristic about the bar is that every Friday they have 98-cent beer and liquor for an hour celebrating Tobacco Road’s 98th anniversary.

Tobacco Road is located in between Brickell Avenue and downtown, a convenient location that brings an extended variety of characters to the bar at all times of the day.  During lunch or in the early afternoon a varied assortment of individuals there can be found there, from senior executive â€˜suits’ to the up-and-coming junior executive urban achievers who, during brief breaks from their downtown jobs, choose to go to the local bar to enjoy a nice meal along with a refreshing and relaxing drink. When the night starts to kick in, so does the bohemian mix of  people who live near by and want to go to a familiar and friendly bar before starting the night. These types of people can also be found at closing hours for the last call.

In between lunch and cocktail hour, long time patrons, individuals who have been going to the bar for as long as they can remember, once again wander in, seeking the comfort of the stool and the bar. Tobacco Road is definitely a neighborhood bar, a spot to have a drink with friends, or be alone, to drown sorrows, or to celebrate a good deed.  The bartender, Johnny, always welcomes the regular costumers and the new ones equally, providing excellent service and a terrific sense of humor.   Each individual at the bar has his or her own story; some even called the unusual bar home.

For six days a week, there are live bands playing in the back, an outdoor terrace where a homeless man called John hangs out every single night just to enjoy the good music.  John dreams of one day becoming a singer, and the good fellows at Tobacco Road encourage him at every show, allowing him to freely sing to whoever wants to hear.  This irreplaceable detail gives the bar a gracious personality that inspires these inimitable characters to return and, as many have in the past, create a home out of these simple memories.

The Rock and Roll and Blues vibe of the place is legendary, an atmosphere that gels and molds with the characters that can be found in between those wooden walls, metal ladders, signed posters, and alcohol ads.  If those walls could talk, the most interesting anecdotes in Miami would surely come out of that hole in the wall called Tobacco Road.