First there was Wii Sports, a Wii launch title. Then came Wii Play, a game that sold millions and millions because of its bundled Wii remote. Then there was Wii Music, a highly creative idea but one that few (relatively) embraced. So what’s the next Wii ___?

At a presentation for investors earlier this week, Nintendo president Satoru Iwata revealed Wii Party, the next “marquee” Wii title and one that aims to embrace and exploit the Mii fascination associated with the Wii and its library of titles.

“As you know, ‘Wii something’ are the titles that we use only with software that Nintendo has developed exclusively for Wii with the aim to make them marquee titles for Wii,” Iwata said. “We are developing this game with the aim to make it a marquee party game for Wii.

“The developers are spending significant time for this title so that they can include elements that are must-haves in a party game as well as making sure that adequate volume of game play are available. We are developing it with the intent that every Wii player will be able to find a game that can be enjoyed. In a game play mode called ‘Living Party,’ there are unique game play only available with the Wii Remote.”

The game was referred to as Nintendo’s first “marquee party game” since 2007’s Mario Party 8, leading us to believe that famed franchise is done and the Wii Party revolution is upon us. 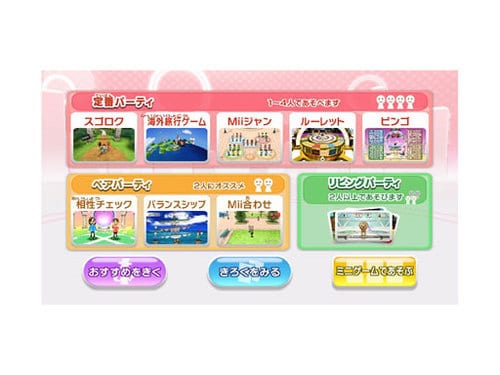 Kotaku, the site breaking the story, is reporting the game is due out by the end of Nintendo’s fiscal year, the year ending March 31, 2010 and have reached out to the company to discern if Wii Party is to grace North America as well as Japan.