A 24 year-old Alabama man is a million dollars richer today, as he has thrown a perfect game and won the highly coveted  MLB 2k10 promotion.

Announced back in January was the million dollar promotion. Basically, the first to throw a legitimate perfect game, 27 up, 27 down, takes home a cool million.

Wade McGilberry, 24, of Semmes, Ala, who entered the contest two months ago, was declared the winner this morning on “The Early Show.”

McGilberry said he didn’t even play sports games prior to the contest, favoring Call of Duty and Halo 3 to anything sports related. 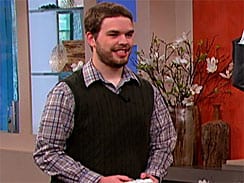 However, his hand-eye coordination skills transferred over to the baseball game, as he was able to complete the perfect game on his sixth try.

McGilberry entered the contest, but when he received a call from 2K, he had no idea he was about to become a million dollars richer.

“They actually called me on Sunday afternoon and told me they were going to come and they had to check out my Xbox because I was one of the finalists and they had to make sure that I didn’t have the Xbox rigged.”

With the money, McGilberry and his wife plan to pay off their mortgage and start a family. How nice.