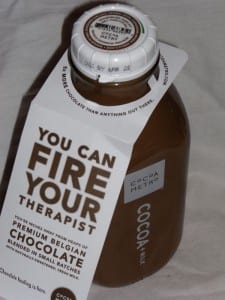 Mike and Elizabeth Dunford consider themselves chocolate milk connoisseurs. Instead of collecting post cards and souvenir t-shirts on vacation, the 35-year-old Newton, Mass resident and his 34-year-old wife visit local grocery stores to try regional brands of chocolate milk. But they say they have not found one yet that rivals their own.

The Dunfords developed the brand Cocoa Metro in their home kitchen a little under a year ago. Launching a business for high end chocolate milk in the teeth of a recession has not been easy. But the couple, who moved two young children from Utah to Boston, have never been about taking the easiest of paths. Mike said they never could find the right quality of chocolate milk, so the tall creative director with tousled graying hair and a boyish grin decided to perfect his favorite childhood drink.

"I was a heavy drinker," Mike said, remembering his childhood obsession with chocolate milk.

Large canisters of powdered chocolate from Cosco and gallons of milk disappeared from Mike’s Salt Lake City home when he and his cousin got together. But as an adult Mike found the chocolate milk he guzzled as a teenager tasted kind of "whimpy."

He and his wife set to work mixing and tasting batch after batch of chocolate milk in their home kitchen. "She’s the taste buds," he said, while Elizabeth laughed at her semi-official title.

After the exact formula for the chocolate milk was decided on, the couple researched bottling companies and dairy farms.

"We have a tub full of chocolate milk," Mike said with a laugh, while Elizabeth corrected the statement almost as fast as it came out of his mouth.

After telling friends about their business, the Dunfords often got questions about the process of how one "makes" chocolate milk.

"A lot of people ask us if we make it ourselves or how we store it," Mike said. He began telling people they stored the milk in their bathtub and bottled it daily.

The milk is actually bottled by a company in Massachusetts, the exact name Mike guards as a trade secret. Costing twice as much as its closest competitor at $6 a bottle, the chocolate milk tastes like melted chocolate ice cream and is almost as thick as a milkshake. Mike said he was not really worried about it selling, despite the recession.

"Six bucks is not much to sit down and have a good experience," Mike said.

Taking risks is part of life for the Salt Lake City natives. Between high school and college Elizabeth boarded a plane to Taiwan to teach English without the promise of a job or even housing.

"My mom bought me the ticket," Elizabeth said with her melodious laugh and calm smile.

In 2007, the couple uprooted their then two children to move to Massachusetts so Mike could attend Babson College near Wellesley, Mass and earn his MBA. He had been accepted into a business school in Utah, where his then employer would have paid for his MBA. But after hearing about Babson’s reputation for preparing small business owners and considering the course they should take, Mike quit his job in Utah, the couple sold their house, and they started to plan a move before Mike was even accepted into Babson’s program.

The research continued with Cocoa Metro.

"We found that the sales of cigarettes, booze, and confectionary actually go up during a recession," Mike said.

The research appears to be accurate, as most stores could not keep the product on the shelf during the Christmas season and after less than a year of it hitting Whole Food’s shelves, Mike said Cocoa Metro is almost at the break-even point. In the Boston area 29 stores are selling the product. Just recently, it is being sold in Rhode Island with a teasing status on the company’s Facebook page suggesting it will be sold in Hartford, CT soon.

The Dunford’s part-time driver and assistant, 49-year-old Dean Drommond attributes the success of Cocoa Metro to Mike’s skills in advertising. Drommond worked as a stock trader for 25 years, so he said he knew the basics of new companies and their odds of success.

"I didn’t think a high end product would be so catching," Drommond said. "But Mike has a background in the advertising business. That’s one of the real strengths of the company."

Before he was in the chocolate milk business, Mike worked as a creative director and interactive art director. He utilized his past experience by coining phrases like "Don’t be afraid of the dark" and "You can fire your therapist" to advertise the new product. Creating the stark white Cocoa Metro, he recreated the nostalgia of selling milk in glass bottles with white screw top lids similar to the bottles the milk man would have dropped at the door in the â€˜50s.

Elizabeth said she always knew her husband would start a business. It was her prodding that sent him on the search for business schools. She knows her husband of ten years pretty well. They met when she was in eighth grade. According to Elizabeth, they were best friends all through high school and always chocolate lovers.

"I remember a lot of trips to the store to get candy bars," Elizabeth said. "Whatchamacallits were my thing back then."

In high school Mike and Elizabeth traveled to Germany. The couple attributes much of their knowledge and love of chocolate from those trips.

"They just have such a variety of chocolate that you don’t find here," Mike said. Mike and Elizabeth’s love of chocolate led them to study the beans and flavors. Mike said he always dreamed of opening a store filled with exotic chocolates.

When this dream of a store for chocolates shifted to creating Cocoa Metro, Romney Evans said he knew the product would sell. Evans, 32-year-old founder of mytruefit.com, a website designed to help women find that perfect pair of jeans, graduated from Babson College in 2006 one year before the Dunford’s move. Also a transplant from Salt Lake City, Evans knew Mike and Elizabeth and their family before their journey to the East Coast.

"Mike and Elizabeth have an innate sense of what customers want," said Evans, who said he has four bottles of Cocoa Metro in his refrigerator at home.

This sense of what people want to eat in some part has come from the Dunford’s interest in sharing their love and knowledge of chocolate with other people. Evans attended a party at the Dunford’s home, where the game of the night involved chocolate bean tasting. Every guest received cups of cocoa beans, jotting down the flavors they tasted in the particular beans. Once everyone finished trying the various bean, Mike read the research he and his wife had found online on each particular bean, highlighting the taste profiles.

"It is amazing how different the cocoa beans taste," Elizabeth said. "We all went back and tried the beans again to see what flavors we had missed."

Since the creation of Cocoa Metro and the rigors of starting a company, the couple said those sorts of nights had to be put on hold.

"Our social life has taken a dive," joked Elizabeth.

Their few spare minutes were spent scaling, mixing, and tasting chocolate milk. They bought a scale to keep track of the exact ratio of ingredients. After trying batches of milk with various chocolate the couple chose the food industry staple Callebaut cocoa for the product, because of its ability to blend with the other ingredients.

Mike made the messes. He said he would be the one mixing and handing off cups to Elizabeth so she could give her opinion. Evans remembered being asked to try the experiments a few times as well.

"I probably wasn’t very helpful, because I liked every version just as much," Evans said.

The Dunford’s said one of their next goals is New York City, but branching out was a matter of finding time.

"Adding stores for us has really become when we have time to do it," Mike said. "If we can meet with them in person and have them try the product, they are sold."