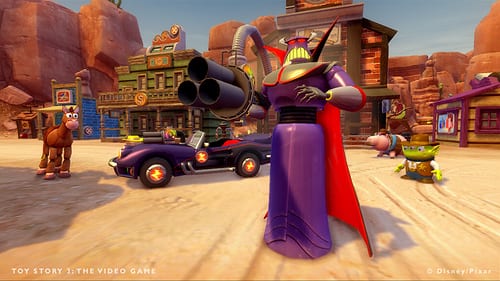 When the game releases June 15 on every major platform under the sun, players can play as Buzz, Woody, and Jessie through eight platforming levels. Avalanche says the levels won’t be a direct tie-in to the film’s plot, only that the “player will visit some of the places, and meet some of the new and classic characters that are in the film.”

But the game’s “Toy Box” mode is where the fun seems to be. Here, in this non-linear destination, players can play with all of Andy’s toys and create all sorts of imaginative things as they complete various missions, playing as the aforesaid characters and the evil Zurg.

Finally, Avalanche Studios confirmed PlayStation Move support for Toy Story 3: The Videogame, something we pretty much already knew, saying it “was cool working with Sony and this new technology to create downloadable mini-games designed specifically for this new motion controller. So, come Fall, there will be even more ways to play with Toy Story 3.”

Race over to the PlayStation Blog for more information on today’s announcement.