With a name like, â€˜The Penal Zone,’ you know you’re in for something ridiculous. Sam and Max: The Devil’s Playhouse: Ep.1 – The Penal Zone from Telltale Games is a pretty casual experience that is heavy on dick jokes and, sadly, somewhat short on overall entertainment.

Sam and Max are a 50-style cartoon detective crew (animals — mind you: a chubby, insecure dog and a twisted bunny) that seem to have gained most of their popularity through the consistent release of games they are featured in (3 seasons worth now), rather than through traditional comic book success. Previous games in this series have reviewed reasonably well, though this game was my first experience with the franchise.

The Penal Zone is the first in a 5-episode series of point and click adventures that relies heavily on nerdy bathroom humor to try to coerce you through a series of elaborate brain teasers. You walk around as Sam, the dog in a suit, and collect items of various consequence, after a suspicious space-gorilla has landed in the middle of your block. It’s up to your crack detective work to determine what to do with the items and when to use them. Some can be given to other characters in order to advance the story, some will be useful only through further analysis and others will be placed in the environment at appropriate spots to trigger puzzle solutions or advance plot points. 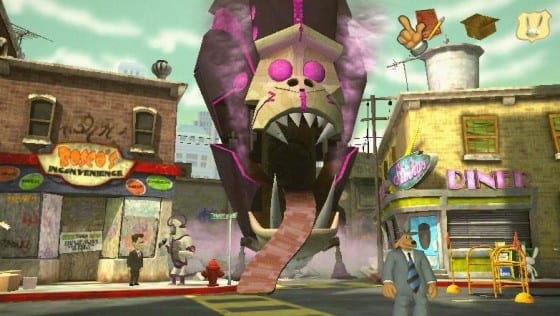 Sam’s sidekick Max serves as a wild card character that has been bestowed with a set of powerful psychic abilities. He is able to use the â€˜Toys of Destruction’ that give him the power to see the future and teleport between phones, in addition to some other briefly used but notable abilities. One very interesting trick is the ability to teleport to a phone that you have on you. You can leave it in places or get separated and teleport back to it for clever solutions to several problems and puzzles in the game.

There are some fun elements to The Penal Zone — just saying it for one – and a number of wacky tools the game offers you to be used in a number of creative ways. The lead villain, General Skun’ka’pe, meaning skunk-ape, is for sure the best character in the game. He’s an overly articulate space gorilla with a a heavy penchant for BS-bravado and a bitchin’ ship that has been crafted to resemble his own likeness. With the general headlining the show, much of the voice acting is extremely good – even if the dialogue is mostly so-so. 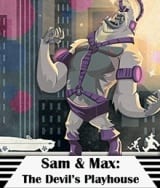 Blast Factor: What you realize as you get into it is that The Penal Zone is really attempting to be a comedy vehicle more-so than it is a video game. The main problem for me was that I never quite felt like the comedy aspect of it ever got off of the ground. There is an onslaught of jokes, many of which are just not funny and yet very long-winded at the same time. This led to impatience for me, as I often just wanted to get to the point. The game does allow you to skip through all the jabber-jawwing, but it’s easy to miss important clues in doing so. You are faced with the painful choice of enduring bad dialogue or run the risk of severe frustration down the road.

Sam and Max will have to get a lot funnier to interest me in ‘The Devil’s Playhouse: Ep.2’.

In spite of all this, you do drive a really sweet car — a 1960 DeSoto Adventurer. Its usefulness is limited with the ability to teleport, however. 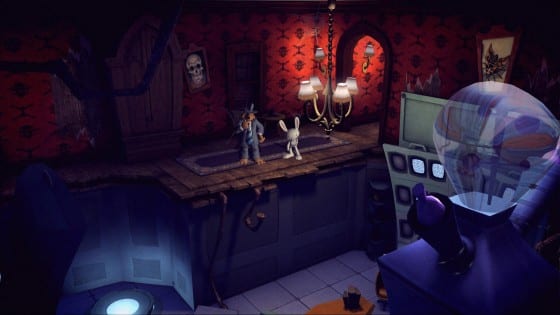