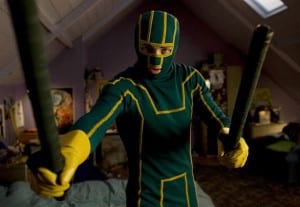 There are no A-listers in the film, but it’s a fantastic piece with comic book action and tons of quirks.

Sometimes, despite a movie’s quality, the quantity of dollars just isn’t there. That’s what happened this weekend when “Kick-Ass” failed to meet its $25-$30 million opening weekend predictions, and took the No. 2 hold at just under $20, behind another week of Dragon lore.

The opening weekend disappointment is already leading to speculation that the hinted-at sequel to “Kick-Ass” won’t be made.

“Kick-Ass” was directed by Matthew Vaughn and stars Aaron Johnson and Chloe Moretz.

Comic Book writer Mark Millar is working on a comic sequel, but we’re not sure if it’s going to turn into a movie. The next few weeks will be crucial.

Did you see “Kick-Ass?” What did you think? Do you want to see a sequel? Leave comments, damn you!