During a recession, a second television may not be a priority. As the economy recovers, though, buyers might find a little extra money to splurge on such a purchase.

We tested four smaller high-definition televisions under 40 inches in different price brackets for secondary use in guestrooms, offices, bedrooms or even kitchens. We viewed some of our favorite shows on the value-conscious Sceptre 19" LED HDTV at $199; the larger screen and more robust feature set of the Vizio M220VA 22" LED HDTV for $300; the balanced Sharp Aquos LC-32D47UT at $549; and the simply indulgent NuVision Lucidium NVU32FX5, a 32" LCD HDTV, for $1249.

Robert Stanton, of Smarthome and Theater Systems, based in Milford, Conn., recommended the Vizio or the Sharp.

"If you asked me a year ago, my take on Vizio was â€˜so-so’ at best, but they’ve made some really big changes to their product line, and their products are really getting a lot better," Stanton said.

The Vizio is a good bet. This is a fantastically inexpensive TV that gives you tons of features like dual HDMI inputs, which are digital video plugs for the maximum high definition picture quality, and it also comes with an optical digital audio port, to work with a multi-speaker surround sound system. The picture is also bright, clear, and easy on the eyes and the TV set is razor thin.

But if you want something a bit bigger,  the Sharp AQUOS produces a wonderful picture on a 32-inch screen. The picture is crisp, the colors are natural, and though it’s not as thin as the new, LED televisions, it still has a low profile. The only part we didn’t like as much was the onboard speakers.

Like the The LED Vizio, the Sceptre television is super thin, so it hangs on a wall and looks like a picture frame, or sits on a desk without taking up much room. Overall, the Sceptre gets an "A" for effort, but it’s not nearly as good of a television as the others. You’re saving money here, but giving up some picture quality.

NuVision is a luxury maker. It has high 10-bit color processing and advanced hardware on board to give an optimum picture and sound experience — and it delivers. We’re just not sure all that money is needed for a bedroom television. You also get some style points with the NuVision. The television has a limited edition hot pink model available, and the company offers a program that will custom-tailor the casing of the television to match your home d©cor. Again, neat, but not fiscally practical.

"NuVision builds an incredible product," Stanton said. "But if you’re going to use it as â€˜light to go to sleep to,’ I would go with the Vizio."

Pros: You get a thin LED television for under $200. It has a litany of ports, including dual HDMI, computer inputs, and digital audio.

Cons: Port location is poor, and plugs are often hard to reach. Picture quality is meager at best.

Final word: You can spend a few more bucks for a better television.

Pros: The Vizio is razor-thin and displays an incredible high-def picture for just $300. It’s also stylish and comes in either black or white.

Cons: None that we can see.

Final word: This is not 2006’s Vizio. This is a quality television and a perfect way to get your feet wet with LED television technology. 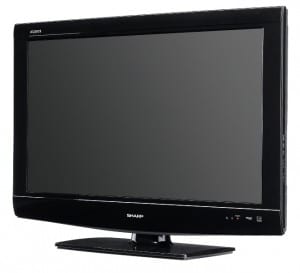 Pros: The Sharp AQUOS produces a wonderful picture, and we’ve seen it on sale for under $400, so the price is right.

Cons: The onboard speakers are not great.

Final word: If you see it for under $400, buy it. You’ll love this television.

Pros: NuVision is a high-quality television maker that custom builds its hardware and screens to amazing results.

Cons: Price is the worry. The Pink model is $150 more for the same product.

Final word: This is a fantastic television if you can afford it.