All right, kids, the iPhone 4.0 software is here. Well, not really. You’ll have to wait until June to get the OS on your phone, unless you have an iPhone 2G, in which case the OS will never hit your phone. Oh yeah, and if you have a 3G, only some of the features will be landing on your phone, not including the most important one: multitasking.

Your eyes did not deceive you, multitasking has finally arrived on the iPhone. While welcome, it sounds better in theory than in practice, though. Users will be somewhat limited in the apps that will have full multitasking capabilities to music, GPS, VoIP, and a few various other apps, but all other applications will merely be suspended when users switch apps, though they can be picked up right where they left off. It’s not full multitasking functionality like a computer, but it certainly covers most of the apps we need to keep running while in other apps, and will certainly quiet many multitasking critics. Users will double tap the center button to see all the running apps, and click on the app they want to switch to.

Local notifications are one of the cooler features on the new OS. Applications now have the ability to communicate with each other, so even if users have navigated away from an app, if it is running and something important happens, users will receive a message directing them back to that app. Without this feature, multitasking wouldn’t be nearly as functional, because the OS lacks a dock navigation bar, so some applications would be bound to get lost and forgotten, only to eat up more of the phone’s precious resources.

The UI received a facelift too, as users worried about too many icons on their homepage can now drag one app on top of another to create a folder. Users can now store up to 2,000 applications on their iPhones, more than anyone could possibly need. And, as expected, users can finally choose a consistent wallpaper for their backgrounds past the lock screen.

Another addition to the OS is a unified inbox, which will allow users with multiple email accounts to view them all in a comprehensive inbox. Threaded messages might be the more important new feature to the mail client, as users can finally follow a conversation quickly without sifting through their inbox for previous messages.

Also as expected, the iBooks ebook reader that has so far performed so well on the iPad will be coming to the iPhone, as well as Game Center, an online gaming service to connect gamers with each other a la Xbox Live. I have a bold prediction on this one. It will mark the beginning of Apple’s entry into console based gaming, where it will develop a very centralized gaming forum and then build a console out from it. Whoa.

The camera will now feature a 5x zoom (I’ll be more interested to see what the specs of the camera hardware are when the iPhone 4G rolls out, as free camera zooms have been available for a while now), and Bluetooth keyboard connect like the iPad currently features.

Now, the feature that seems innocent, but may have a significantly negative impact on the iPhone user experience, the dreaded iAd mobile advrtising platform. I’ll start with a question: Have you ever clicked on an advertisement in an app? Apple knew that the answer would overwhelmingly be no, so they bought mobile advertising giant Quattro Wireless, and are prepared to release more invasive advertising on their phone. The iAd platform will allow users to stay in an app while viewing advertisement instead of being linked to the external web browser. This will also allow for more targeted advertisement, as users of a certain app will generally lean towards certain advertisements.

I have a couple of problems with the iAd platform. One, I should not have to see an ad on any app I pay money for. In fact, I will pay more to enjoy an application without advertising interfering with my interaction with the software. Second, the iPhone screen is tiny. I’m already struggling to see my application, and now the area that my application is being displayed on is going to be decreased even more? And it’s not like many applications have a zoom to fit option, so I can’t just tune ads out like I can in Safari. Which leads me to my final point. With any other form of advertising, there is an easy way to avoid it. There is no way around iAds. They will permanently be living in my favorite applications, and I won’t be able to escape them.

All in all, I think the iPhone 4.0 OS is a success. Everyone should bear in mind that a lot of features the OS is capable of will require the new hardware to function properly. Exploring the OS has already revealed folders hinting at exciting new capabilities (namely video chatting, which also implies a front-facing camera). Basically, the iPhone 4G is going to be a beast, and remain king of the mobile jungle. 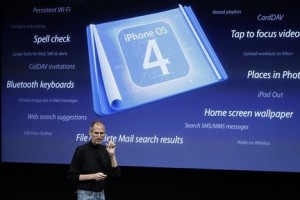 Apps
Since we ran a little long on the news, I thought I’d share my favorite apps with you. I certainly don’t know all (though I like to pretend I do), and am always looking for something new to add to my phone, so if you have apps that you particularly love or one makes your day better, please share them in the comments. I’d love to check them out.

Shazam– Music is my passion. Everything else is secondary. That’s why this app is the most indispensible one on my phone. The ability to listen to something cool and be able to identify it in seconds is nothing short of magical and revolutionary. Man, Steve Jobs really has me drinking the Kool-Aid.

RJDJ– Did I mention I like music? This app takes input from the microphone, and depending on the "scene" you select, shifts that input and makes it into music. Cars going by, sirens, anything you can think of, it all sounds amazing through the app. Really fun for walking around the city. Some scenes even react to your personal input, like sliding or tapping the screen. Always keeps me entertained on the T.

Evernote– Best notebook application by far. It syncs up with a desktop download so you can have all of your notes with you wherever you go. And it’s totally free. Sweet deal.

Opera Mini– Ok, so I don’t have it yet, but against all expectations, Apple approved the superfast browser and it should be on the App store within 24 hours. Anyone know how to delete Safari off my phone?

Doodle Jump– The most addicting game for the iPhone. Intense competitions abound between the iPhoners in my apartment, usually ending in fistfights. Totally worth it.