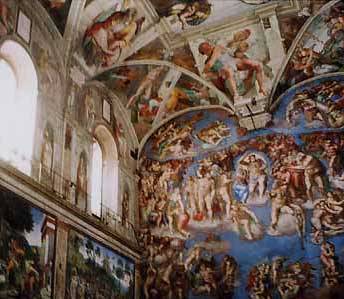 ROME — "Without having seen the Sistine Chapel one can form no appreciable idea of what one man is capable of achieving" said J. W. Goethe in 1787 in Rome.

The Vatican has a very detailed, three-dimensional, Flash tour of the Sistine Chapel. There’s nothing new about the technology itself, but the implementation new for the historic chapel.

Sistine Chapel is the best-known chapel in the Apostolic Palace.It is famous for its architecture, evocative of Solomon’s Temple of the Old Testament, and its decoration which has been frescoed throughout by the greatest Renaissance artists including Michelangelo, Raphael, Bernini, and Sandro Botticelli. Under the patronage of Pope Julius II, Michelangelo painted 12,000 square feet (1,100 m2) of the chapel ceiling between 1508 and 1512. He resented the commission, and believed his work only served the Pope’s need for grandeur. However, today the ceiling, and especially The Last Judgement, are widely believed to be Michelangelo’s crowning achievements in painting.

The chapel takes its name from Pope Sixtus IV, who restored the old Cappella Magna between 1477 and 1480.

Now it’s possible admire the Sistine Chapel online. Of course it’s a different view but it’s a nifty experience, a 360-degree, zoomable simulacra of the legendary chamber, with its assorted frescos, some of the most famous religious artworks in history.