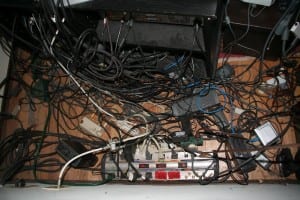 ZVOX, the Swampscott company behind some truly amazing single-cabinet home theater speaker systems, had announced an “Ugly TV Contest,” where consumers can show off that fire hazard maze of wires behind their television for a chance to win a ZVOX Z-Base 550 soundbar.

"TV wire hairballs are a growing problem in our society" said ZVOX founder Tom Hannaher. "It started out 30 years ago with a simple VCR hookup, but now there are cable boxes, Xboxes, Blu-Ray players and multi-speaker surround sound systems. It’s a real mess. I’m suspicious that wires mate and produce offspring back there!"

The ZVOX Ugly TV Contest is designed to draw attention to this pernicious malady before family pets or young children are lost in the copper jungle that exists behind most modern TVs. “I have four children including a seven-month-old boy who’s just learning to crawl,” exclaims Kate Connors, Internet Marketing Manager at ZVOX. ‘”He could get lost in the wire jungle.”

Entry photographs should be emailed to [email protected], with “Ugly TV Contest” as the subject line of the email. Entries must be received no later than April 30.