Gears of War designer Cliff Bleszinksi was supposed to be Jimmy Fallon’s guest tonight on his late night program to announce his new game, but 16 year-old teen sensation Justin Bieber ruined everything. 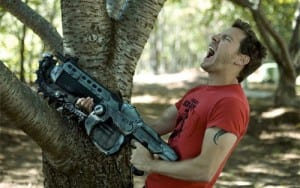 Jimmy Fallon producers say a “scheduling” conflict is the reason CliffyB and his game, were bumped in favor of the teeny-bopper.

However, Bleszinksi said Bieber shouldn’t be held at fault. He said the “11th hour” decision was actually enacted so whatever he does show is in top shape.

“the truth of the matter is that we wanted to take a couple more days to polish what we’re showing,” said Bleszinski via Twitter

Everyone will have to wait until Monday, April 12, where Bleszinski will appear on the show to announce to the world the secret project, which we assume to be Gears of War 3. Set your DVRs!