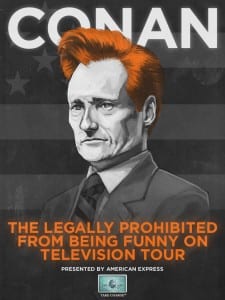 The Bonnaroo Music & Arts Festival in Manchester, Tennessee, the three day event running from June 10-13 — the one known for copious amounts of fun (apart from camping in cornfields and the loss of appetite from the crowd of unbathed festival goers) is in for its fair share of laughter this year. Conan O’Brien, the recently "let go," member of the tonight show family on NBC is scheduled to perform at Bonnaroo’s comedy tent, along with other acts like Aziz Ansari and Bo Burnham.

Besides performing in the Comedy Theatre, on the Friday and Saturday nights of the three-night event he’ll also be MCing the WHAT Stage. For those uninitiated, Bonnaroo has a collection of tents all titled as cleverly and they all house the more famous music acts of the festival. With Conan tossing banter in between bands and introducing them, the whole event reeks of good times. Tickets are on sale now and with other famous acts like Stevie Wonder and Jay-Z hitting the stages, a comedian like Conan seems like a great fit.

More artists and comedians are added periodically throughout the year until shortly before the concert itself, so stay tuned to the Bonnaroo website for more information. I’ve been twice and hope to go sometime in the future and these festivals are a pretty good time. Get ready to lather yourselves in sunscreen and drink water like you’re in a drought because you’ve got to pay the price to see such good entertainment.