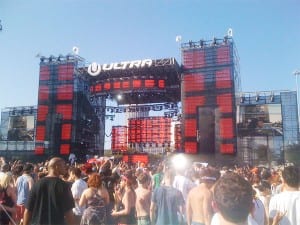 MIAMI — The Ultra Music Festival happens once a year in downtown Miami during the Winter Music Conference and brings together passionate music lovers from all over the world to rave, to enjoy good music, to feel alive. The concert is so intense that some can only take a few hours of it, while others stay the entire time. The Ultra Music Festival has been one of the biggest electronic festivals in the world for the last 11 years and, from all accounts, will continue to be for many more to come. Every year, new performers are introduced, impressing the fans with great shows in a huge open space that gives guests the liberty to wonder around without any worries. The City of Miami also welcomes them with open arms since the festival brings the city much-needed revenue.

This year, the festival took place March 26-27. It included over 200 artists, eight stages and over 100,000 fans and party monsters. It marked largest number of performers and the largest amount of attendees the festival has seen.

DJ Carl Cox had a stage named after him, "Carl Cox & Friends Arena," offering one of the best performances at the festival both days.

The Crystal Method, performed Friday at Bayfront Stage, but unfortunately had problems with the sound during their performance. Several fans were understandably disappointed, but the show was still enjoyable.

Electronica act Rabbit in the Moon performed Saturday at the Root Society Dome. This band is known for its artistic performances, and this year’s was just as expected, with a show featuring dancers, unique costumes and exceptional music.

The day glow stage was for smaller musicians such as the String Cheese Incident offshoot EOTO. Ahead of a 42-date U.S. tour, they performed brilliantly at this year’s Ultra Music Festival with especially distinctive percussion beats.

On Saturday, at the main stage, Benny Benassi played with guest performer Kelis, driving fans insane with his perfect beats. The main stage’s sound was so impeccably clear that every beat could be easily heard. The closing band for the main stage was Deadmau5, who performed wearing a mouse mask. He also surprised the audience by appearing with Tommy Lee. By then, just about all the festival attendees ran to the main stage, leaving every other stage empty for the first 15 minutes of the show. Unfortunately, due to the amount of people crowding the main stage, the sound started to distort and the people at the back could not listen to the performance. Perhaps this will result in the organizers of the Ultra Music Festival having to find a bigger location for future years.

Those listed above were only a few of the extraordinary performers that brought so much power to the irreplaceable festival.

Few people realize how much work goes into putting on a show such as the Ultra Music Festival. For example, in order for artists to get to and from their respective stages from the artist’s entrance, there are backroads especially designed for the six passenger golf carts that drive around all day â€” from 9 a.m., when the venue opens up, until the last concert is finished. Each stage needs to be fully stocked with supplies, including water, ice, sodas and alcohol. There are several single passenger golf carts driving around all day making sure everyone is comfortable. A team of about 2000 individuals is responsible for making sure the  festival is successful.

Although artists are assigned their own dressing rooms to get ready for their shows, they usually have some time to relax before or after their performance, and like to spend that someplace else. Because of that, UMF made available an artists’ VIP area, a space located right in front of the bay with comfortable seats, exceptional bathrooms and a full bar. The media tent was situated right near the artists’ VIP Lounge, making it convenient for performers to stop by.

The Ultra Music Festival gives the audience an opportunity to show off their wildest outfits, one of the most important elements of the show, and one that gives the festival its unique character. This year, the streets of downtown Miami looked like a circus all weekend long. It’s impressive how much effort, time and money attendees put into their attire, leading people to wonder if UMF is not only about the music anymore. The crowd had its own show going on, with a kaleidoscope of colors- mostly in neon, and day glow. At times it seems as if they wanted to be the show itself.

After a long weekend of terrific music and brilliant performances, it can be said that the Ultra Music Festival has become not only the best event during Winter Music Conference but more than simply a music festival. It has become an experience. Many unforgettable performances were given by unique musicians to their public. At the end of the show, it was announced that Ultra Music Festival 2011 will be a three day event, which gives everyone present a full year to get ready for the madness that UMF 2011 is sure to bring.