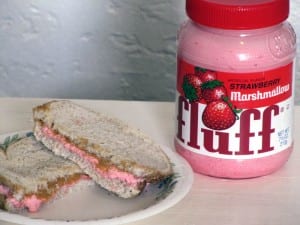 Marshmallow Fluff is a sweet, sticky goop that’s delicious to those of us with a sugar tooth. It spreads like peanut butter, but essentially its candy made almost entirely from corn syrup and sugar. That’s why kids love it and some adults have called it a junk foot not fit to be a part of school lunch menus.

There are some imitators sold as "marshmallow creme" or whatever, but Fluff is the real stuff. Fluff was born in Massachusetts and the farther you get from the Bay State the less you see it. There was even talk of making the Fluffernutter, a sandwich of peanut butter and Fluff, the official state sandwich of the Commonwealth.

Given concerns about American eating habits and epidemic obesity, that idea died quickly. But the controversy created a rise in sales. For some adults, Fluff had fallen off the radar. Hearing about the Fluffernutter again, the classic expression of which is served on white bread, people grew nostalgic for it.

Fluff was originally made and sold door to door by an inventor from Somerville. He soon sold the recipe to a pair of candy makers in Lynn who put it in metal cans and premiered it on supermarket shelves in 1917. In the 1940s it was put in glass jars and it became even more popular. Today it’s usually sold in plastic tubs, but you can still find it in its distinctive, bumpy-texture-decorated glass jars that some kids and former kids can identify by touch alone. It’s made by the same Lynn company that bought the recipe a century ago.

Whether glass or plastic, the container with its blue and white label and red lid is iconic. That’s why my eye was so drawn to the new strawberry-flavored version, with its red and white label, when I passed it in a Boston supermarket. "7.5 ounces for $1.49? I’ll try it!" The cashier was struck by it as well, and my check out process came to an abrupt halt as she held the jar in her hand, looked at it quizzically, and moved it closer and farther away from her face several times. She seemed to think she was hallucinating but maybe, like me, she was just intrigued.

Unbagging it at home, I noticed the first sign of trouble. I wasn’t really bothered by the unwholesome bright pink color that resembles nothing in nature, but inspecting the transparent bottom of the glass jar, I noticed that the color wasn’t uniform. There were little areas, especially around air bubbles, where the artificial colors had concentrated into darker, reddish tones. I couldn’t help worrying that this classic treat was resisting change on a molecular level by expelling the adulterations that changed it from its familiar marshmallow-white color.

I made a Fluffernutter. I ate a third of it. I was bad. I put it down. The sugary taste of classic Fluff compliments peanuts the same way that sweetness works in peanut brittle or a Snickers bar. But the strange, medicine-y taste of the strawberry-flavored stuff was overpowering. I looked down at my sandwich. Now the color bothered me. Along the bite mark, it formed a sort of florescent pink lightning bolt that glowed like a dangerous radioactive substance.

A couple days later, I considered giving it another go, but I wasn’t so sure. I opened the jar and peered down with suspicion. I stuck my nose inside and took a big whiff. It smelled like Strawberry Quik, a drink I enjoy despite its obviously artificial flavor. Perhaps this stuff just didn’t go well with peanut butter. Perhaps it would be better on its own.

Grabbing a Ritz cracker, I dipped it inside like a potato chip, and took a bite. I knew immediately that was a mistake. With eyes closed, shoulders hunched, and arms crooked, I spasmed like an epileptic praying mantis. An observer would have thought I’d just burned my tongue. Full on, without peanut butter, this product was far worse.

I wasn’t expecting fresh strawberries and cream. I knew it was artificially flavored and I know that the relationship between fake flavors and the fruits they are named after is purely coincidental. I’ve had "watermelon-flavored" Jolly Ranchers. I’ve had "apple-flavored" Blow Pops. But this was a disaster.

Fluff’s an American classic. That doesn’t mean it’s sacrosanct, nor that innovators shouldn’t try new things with it. But when the experiment fails the disappointment is that much greater. The folks in Lynn also have a raspberry-flavored version I didn’t see in the supermarket. I honestly think it’s probably better (it certainly can’t be much worse) but I’m not interested in trying it

I can still rhapsodize about Fluff based on pleasant old memories. But now, a Fluffernutter, even with the classic stuff, is last thing I want to eat. Talking about a trauma is part of the healing process. I’ve begun that journey, and at some point, I’ll be able to pretend this never happened. But I won’t forget.