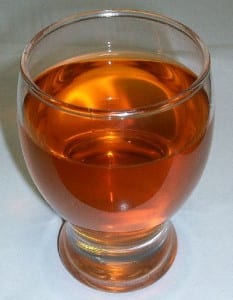 For the linguistically conservative, the word “tea” refers to a specific plant, Camellia sinensis, that comes from China. Almost anything else people seep in hot water to make a beverage — whether it’s rose hips, hibiscus, mint or even marijuana — is more accurately called a “tisane.” But unless you read Agatha Christie (Inspector Poirot is a big tisane drinker) you’re unlikely to encounter that term nowadays. Advertisers have made “herbal tea” the term of choice in the English-speaking world, and one of the more uncommon herbal teas comes from a South African shrub, Aspalathus linearis, called “rooibos.”

“Rooibos” (pronounced ROY-boss) is a loan word from Afrikaans, and you don’t need a PhD in Germanic Languages to guess it means “red bush." But no part of the plant is naturally red. It’s only after the needle-like leaves are harvested and oxidized that they take on a distinctive reddish-brown color. The process has similarities to the way “true tea” is fermented to make it darker. In fact, just like green tea is produced by keeping this stage to a minimum, “green rooibos” can also be produced.

If you’ve never even heard of rooibos, don’t be surprised. This stuff is only grown in the Cedarberg area of Western Cape province. Although South Africans of all ethnicities have been enjoying it for generations, most people around the world will never encounter it. But if you’re curious, don’t let its rarity deter you. Like almost anything else in you can imagine, it can be ordered over the internet if you’re willing to whip out your credit card and then wait a couple days for mail to arrive.

It tastes more like an actual tea than a tisane, at least to my pallet. There’s nothing fruity or flowery about it. It has a deep, smoky flavor. If chamomile tea is Budweiser, rooibos is Guinness. It has body. It’s a man’s drink, or at least it can be. While drinking a cup of it, your pinky finger won’t be trying to point itself upwards daintily. It’s not much less butch than a cup of coffee, but it has no bitterness.

Indeed, one may be duped into thinking rooibos is an unusual take on "real tea". I first encountered the stuff in a box of assorted teas from Twilings of London. This is a brand whose quality I didn’t fully appreciate until I tried a "French Vanilla Tea" produced by a rival company and discovered it to be an artificially-flavored product that assailed my nose with nauseating chemical odors before the cup even touched my lips. I trusted Twinings and didn’t expect any shenanigans from them.

But by calling its product "African Rooibos Red Tea," Twinings is being a little sneaky, whether they realize it or not (I bet they do). One morning, trying to get the sleep out of my eyes, I drank a cup. When it was finished, I felt as drowsy as before. Still chasing a caffeine buzz, I had a second cup. Still nothing. Yawning like a bear who just stepped out of his cave, I grabbed the wrapper, read the fine print, and discovered it’s an "herbal tea." That’s why I’m sorry the word "tisane" has fallen out of common usage. Don’t tell me it’s tea when it’s not.

Some tisanes do have caffeine. An example is mate (often marketed as "mat¨" even though the word has only one syllable), a South American brew traditionally sucked out of a hollow calabash gourd with a specially-designed metal straw. But there’s no caffeine in rooibos. It’s actually believed to more of a relaxant and it’s traditionally recommended for colicky babies, nervous Nellies, and others who just need to calm the heck down. But it’s wrong to think of rooibos as a liquid sleeping pill. Its calmative properties, if they exist at all, are subtle. You might prefer it as a nighttime beverage, but it won’t make you fall asleep at the wheel or anything.

Rooibus may have other properties worth noting. The Bushmen thought of it as healthy stuff long before White people drank it. Some people say rooibos aids in digestion and provides relief for allergy sufferers. Some even make bold-but-vague promises that rooibus helps release "accumulated harmful toxins from the body." Whatever.

Like is often the case with botanicals, many make claims about its benefits, but clinical research is scant. As for scientists really taking a close look at the properties of rooibos? So far, so good. There are indications that if consumed it several times a day, month after month, its antioxidant and antimutagenic properties can reduce the risk of cancer. At any rate, at least it’s not sassafras, a genus of plant that generations of American kids brewed and drank at summer camp until its carcinogenic properties were discovered.

So don’t trip over yourself rushing for rooibos thinking it’s a miracle cure. But if you get a chance to try it, try it. South Africans usually have it with a slice of lemon plus a little sugar or honey. You can also have it with milk because pure rooibos, unlike many tisanes, doesn’t cause milk it to curdle. Drink it while wearing a bow tie and you can pretend you’re Hercule Poirot.