Apple has used the iPhone to make a sneaky entrance into the gaming industry. The swing was confirmed in a recent Flurry report, which stated that while the iPhone’s games only made up 5 percent of portable gaming revenue in 2008, its market share jumped to 19 percent in 2009, to the significant detriment of both the PSP and DS. What makes this meteoric rise even more remarkable is the average price of a game in the app store is $1.36 while most new releases on both PSP and DS are $29.99.

The PSP, which has had its fair share of problems, had the bigger slip of the two, going from 20 percent of the market revenue to 11 percent in just a year. One has to wonder if the PSP’s problems, specifically a high price that ensured that the platform could never really take off, has influenced the iPad’s much lower than expected pricing, especially on the heels of a report on AppleInsider claiming that 44 percent of iPad apps being tested are games.

In addition, if you have spent any time cruising around the app store in the past week, you may have noticed that some apps now have an HD tag. Those apps are exclusively for the iPad, and will far surpass the visual capabilities of both the PSP and DS.

It was a roundabout way to enter the gaming industry, but the iPhone seems to have been the testing medium to see how the public would react to gaming apps on a ubiquitous computing device. Needless to say, the popularity of game apps on the iPhone almost assuredly contributed to what seems like a concerted focus on the gaming experience for iPad users that should make Apple’s newest creation a groundbreaking one in portable gaming.

While I’m not entirely sold on the iPad, if I was in the market for a portable gaming platform and was surveying the market, with the iPad’s functionality and fairly reasonable price, it seems to me like a no-brainer to make a bigger investment for an exponentially greater return. One vertical that Apple will certainly be watching when the iPad is released on Saturday are the gamers, who may ultimately determine whether the tablet is closer to a Macbook Air or an iPhone.

In other news, music streaming subscription site MOG announced at SXSW that they will be rolling out a $10/month mobile app for both iPhone and Android in which music files will live in the cloud, and can be downloaded any time to your smartphone.

If you read the column from two weeks ago, this is only further evidence that streaming media to smartphones is a thing of the past. MOG’s announcement is further reinforcement of the cloud revolution going on in software today. Though unproven, the subscription music model should work, given the amount of quality music that is being produced now that there are virtually no barriers to entry in the music industry. It will be interesting to see who of MOG, Rhapsody, Pandora and Spotify can corner the rapidly growing market, and how the iTunes music store will undoubtedly react. 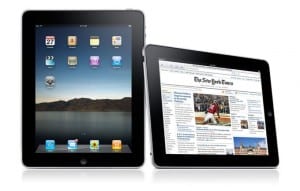 Spring means a few things: unnecessarily wearing sandals on slightly warmer than average days, the beginning of another season of Red Sox dominance (fingers crossed), and shopping for the coming months. In the spirit of springtime, Blast gives you three apps for shopping your way towards warmth.

oMoby-Unsure about a product? Want to know more about it before you buy or walk away? oMoby is a free app that uses your phone’s camera to retrieve information, shopping options, and the obligatory Facebook and Twitter connections about the product. Simply take a picture of the item in question, and oMoby will return links pertinent to the product. Slightly gimmicky, but it works well and is a quick way to aggregate information about a product, or to show off at your Memorial Day BBQ.

RedLaser– oMoby’s grown up older brother, this app is the ultimate shopping companion, and really flexs the iPhone’s metaphorical muscle. RedLaser is a scanner that uses the phone’s camera to quickly scan an item’s barcode and return both TheFind Local Product Search and Google results to ensure that you are getting the best price on the item you are scanning. RedLaser’s barcode scanning technology is amazingly accurate so you probably won’t need it, but if you can’t scan an item, you can manually enter the UPC or EAN code and have both local and national pricing results on your phone in seconds. The app also allows you to keep a backlog of all the items you have scanned, and you can email those items to yourself and others. Even though the app is $1.99, if you use it, the app will more than pay for itself.

Sale Price– Speaking from experience, those that work in your average retail store aren’t going out of their way to make sure you get the best sales price possible on that marked down item you are about to buy. Sales Price quickly calculates the final price of your item using sliders depending on what kind of discount the retailer is offering. Bargain hunters will love the app, though with increasingly advanced retail software, who knows how long this app will be useful for. Still, for free, it’s better to have it than not.