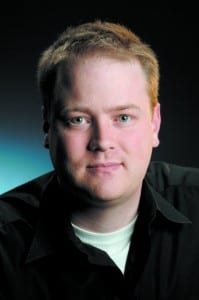 I was sad to pick up the March issue of Maximum PC magazine and find out that it was to be the last issue of the venerable computing magazine with Will Smith at the helm.

Smith, who has been editor of the magazine for the past 10 years, recently launched a new online venture called Tested, where he hopes to bring the same brutal honesty to tech reviews that he oversaw at the magazine formerly known as Boot.

Will eventually responded to nagging Facebook requests for an interview:

BLAST: Why did you leave Maximum PC?

WILL SMITH: I got the opportunity to launch a new site, Tested. I’m building it to be a slightly different kind of technology site, with brutally honest, no-holds barred Maximum PC-style reviews as well as in-depth how-tos about all kinds of interesting technology — consumer electronics, PCs, coffee tech, and anything else that’s interesting. I’ve worked for Maximum PC for 10 years, longer than I ever expected to work anywhere, and I absolutely loved every minute of it.

BLAST: What are you doing with Tested?

WS: So, yeah… I’m working with Norman Chan (of Maximum PC and PC Gamer) and the folks at Whiskey Media (who have launched several sites, including the gaming site GiantBomb to build Tested. They’ve built a really amazing software platform, and I’m thrilled to be able to leverage their software expertise with our content creation chops to build a tech site that’s more focused on helping people get more from the technology they buy than the traditional buy cycle. And, we want to build a really strong community of people who are as excited about technology as we are. I wrote a couple of editorials about why I’m stoked about Tested: http://www.tested.com/news/the-tested-manifesto/12/ http://www.tested.com/news/what-tested-is-and-why-im-crazy-excited-about-it/11/ and http://www.tested.com/news/dont-call-that-a-gadget/14/

BLAST: What was the biggest thing to happen to the PC during your tenure? I know it’s a big list.

WS: Wow, that’s a tough question. I think the biggest change is the commoditization of computing. In 2000, when I started at Maximum PC, I think I paid about $2000 for a Pentium 3, 933MHz machine. While that computer was OK for the time, today anyone can buy a machine for $500 that crushes that computer, and is probably portable to boot. In short, a fast enough computer is finally fast enough for me.

BLAST: What is the future of PC gaming?

WS: If I was a cynic, I’d just toss a link to Farmville in here. As I’ve said for the last decade, the demise of PC gaming has been greatly exaggerated. It’s definitely in a state of flux, and there are major hurdles that the traditional game publishers need to get over. But I see millions of people playing World of Warcraft and massive revenue for Zynga and it’s impossible to say that PC gaming is dying. There are ways for developers and publishers to make money from PC gamers without charging $50-$60 per copy, no one has really done too much experimentation with pricing traditional games on the PC.

Now, do I think we’re going to see any PC-exclusive AAA titles that are designed to push PC hardware, like Crysis? Absolutely not. There’s no way a publisher is going to be able to justify spending $30M building a PC-exclusive game that will only run on a few hundred thousand PCs. For traditional PC games, we can expect DirectX 9 games to be the standard until Microsoft and Sony launch new consoles.

BLAST: If you could keep any one piece of gear you’ve tested over the years, what would it have been?

WS: We had a really, amazingly cool thermal camera in a few years ago for a story. I think it cost $25k – $30k, but you could see things in the real world with Predator vision. That was pretty cool. For what it’s worth, the stuff that I’ve bought that has been really awesome are the iPhone, the Kindle, the HP MediaSmart (the Windows Home Server box).

BLAST: What are your thoughts on the downfall of print media — the magazine, the newspaper, etc?

WS: I think that mainstream, mass market print media, the newsweeklies, entertainment weeklies, and newspapers are going to have a bad decade. The story is completely different in enthusiast, niche publications. Small, enthusiast publications, as well as anyone who puts together a print product that offers unique content that’s well suited to the format, will continue to do well.

At Maximum PC, we built what I think is one of the few unified print/web products, with a print edition that showcases print’s strengths and a website that’s a destination unto itself, not a magazine subscription portal. Despite the terrible economy and overall newsstand decline last year, Maximum PC reached more people on the newsstand than we had in five years. At the same time our website grew something like 700 percent year over year.

I also mourn the decline of long-format content. There are very few sites that can afford to do big, feature-length stories; they seem to be unique to magazines. We’re going to give longer-format stories a try at Tested, but I’m not sure that the online audience is interested.