3D Dot Game Heroes is all about familiarity and nostalgia. The most obvious comparison to the game is The Legend of Zelda–the music, the enemies, the level design, the items (the list goes on) all bring Nintendo’s classic franchise to mind. That’s not the only game that From Software’s latest is honoring though, as there are countless references to old-school gaming and games scattered throughout the experience.

I’m not going to spoil any of that for you here, because that takes a lot of the fun away. What I can tell you is that 3D Dot Game Heroes leans very, very heavily on Zelda gameplay–specifically, NES-era Zelda, where dungeon rooms were all the same size and enemies walked back and forth and reacted when you got close. Now, that’s not to say that this game is a ripoff–that’s a word with negative connotations, the kind of thing we would rather use on a title that just isn’t very good so we can shoo it away. We’ll stick with “homage” here, because what I have played of 3D Dot Game Heroes, I love.

Think of it like Shadow Complex, in a way. That game was a love letter to Super Metroid, the kind that, in many courts, would result in a restraining order. That title was fantastic though, one of the best on the Xbox 360 last year, and 3D Dot Game Heroes is shaping up to be the same way. From Software understands what made Zelda and other classics into, well, classics, and they have used that knowledge to create their own love letter to a Nintendo franchise–I’m perfectly fine with that so far.

Gameplay should be familiar to anyone who has played Zelda in the past, and should be easy enough to pick up if you never have. You attack with the X button, and can swing your sword around in a sweeping motion by rotating the analog stick in the direction you want to swipe. When your health is full, rather than fire a bolt of energy, your sword grows to massive proportions that will fill up a lot of the screen’s real estate. You can customize your swords at the blacksmith shop as well, adding width and girth to it, as well as strength and the ability to pierce through objects with it. 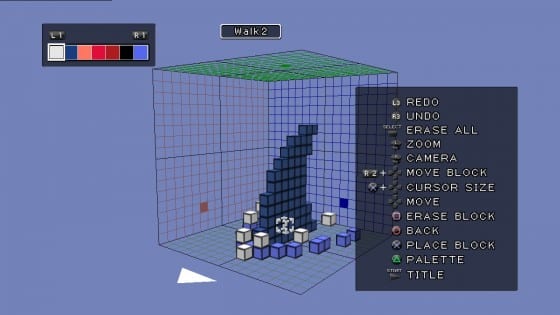 The item acquired in the first dungeon was a boomerang–your fairy companion made obvious reference as to what it may be capable of, something you should get used to as you play along. The boomerang stuns enemies, turns switches on–you didn’t need the fairy to tell you that, which is why her role is more comic relief than anything. I’m curious to see what other kinds of items you acquire, but based on the HUD itself, you can see that bombs and a bow are eventual acquisitions.

Humor in the game is something that stands out, as the translation, even in the early goings, has made me crack more than a few smiles. There are easter eggs and references to old games all over the place, nestled within caves, out in the open, or found in the loading screens, which are based off of the cover art for old-school titles. Again, I don’t want to spoil anything, despite the fact that I’m bursting at the seams to share even one thing with you, but I won’t be responsible for ruining your trip down memory lane.

The character I selected was the default Hero, but there are loads of pre-created characters you can choose from. I say “pre-created” because you can also design your own–seriously, whatever you want to make is good by the game. One of the characters you can choose is a shark that now wields a giant sword, and he fits into the storyline as the descendant of the (human) hero of the past. If that isn’t classic video game logic, I don’t know what else could qualify.

Graphically, this game looks even better in motion than it does in screens. Everything is bright, crisp and colorful, and the effects for light, shadows, water–you name it–all look nice and pretty. It’s got a decidedly new-age sheen to it considering its retro feel, but my eyes appreciate it.

It’s still early in the game, but there are seven dungeons total to conquer on my way to save the world. We’ll have an early review of 3D Dot Game Heroes up later this month so you have plenty of time to save up for May 11 if you decide it’s your cup of classically trained tea. For now, enjoy the screens from early portions of the game.