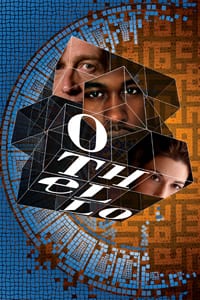 Taking on the title role in this solid, often powerful staging from Actors’ Shakespeare Project, Jason Bowen, is a convincing commanding officerâ€”but he’s far more diplomat than brooding hulkâ€”not the usual reverberate bass to fill the ample boots of the Moor of Venice.

With an upright carriage and an upturned chin, Bowen’s Othello measures his movements, looks his converser squarely in the eye, flashes a winning smile when it serves him, and seems to choose his words to the degree that poetry seems plausible.

In other words he is perfectly in controlâ€”until he isn’t.

Iago, the infamous architect of his downfall, is played here by Ken Cheeseman, who,

broad-shouldered and lanky in a brown leather jacket and military fatigues, bestrides his castmates like a colossus.

Iago is our master of ceremonies for the evening, a task that Cheeseman discharges with great alacrity and a nimble tongue. He is convincing as a casually charismatic, two-faced flattererâ€”but there is something missing. He’s a little too charming. Sure he’s evil, but he’s notâ€”as this great villain should beâ€”the kind of sociopath that makes your skin crawl, that makes you horribly uncomfortable until he leaves the stage. Nor does he steal the show, as an Iago often can, by inducing the kind of poetic Stockholm Syndrome that makes you root for him in spite of yourself. Cheeseman’s Iago works, but is more efficient than anything else.

Staged by director, Judy Braha, in the South End’s Villa Victoria Center for the Arts, a funky, modern-looking former church with a spiral staircase and a balcony, the play is set in a Venice and Cyprus of "the Near Future." It’s an amorphous setting, which turns out to mean a police state in which soldiers wield riot shields and batons. With a minimalist set, and a soundtrack of eerie ambient music to ratchet up the tension, this concept stays out of the way enough to frame the play nicely.

With his na¯ve young accomplice Rodrigo (played for sympathy more than laughs by Doug Lockwood), Iago wastes no time in making mischief, anonymously informing Barantia (normally Barbantio, but a mother in this version, played by Bobbie Steinbach) that her daughter, Desdemona (the charming and understated Brooke Hardman), has eloped with Othello. This is scandalous not only because the wedding takes place without parental consent, but also because Othello is a Moor, a black man, and his winning of Desdemona is portrayed as abduction.

Barbantia takes her fury to the Duke, a character who is usually a mere functionary in the plot, but who, played masterfully by Paula Langton in a Hillaryesque pants suit, immerges as a compelling politician forced to make some quick calculations. Loyal as she is to the senator, Othello’s full powers of persuasion are on display and so the Duke ultimately sides with the outsider-turned-military hero. Together they diffuse the conflict. But Iago is already busy at work on phase two. He hates Othello, in part because of rumors that his own wife, Emilia (a second role for the impressive Paula Langdon, disguised in rags), has also succumbed to Othello’s charms. Iago also hates the generally esteemed Michael Cassio, Othello’s right-hand man, (played here with more earnestness than dash by Michael Forden Walker), mainly because Cassio has surpassed him in rank.

Iago’s plot to take down both at once is hatched with only we, the audience as knowing accomplices. Under the guise of true loyalty, he will, with feigned reluctance, convince Othello that Desdemona and Cassio are having an affair. The ingenious details, all based upon an astute assessment of each character’s principle weakness, will be discovered as he goes. But he knows from the start that he will get Cassio’s place and provoke Othello to betray his stoic image, and he knows that many are just waiting for the Moor to prove himself an unworthy match for his highborn white wife.

As usual, this Actors’ Shakespeare Project production places its heaviest weight on the words, a wise decision when dealing with one of the undisputedly greatest scripts of all time. It’s a story of ambition and envy that asks just what people are willing to believe and why. It has an almost omnipotent villain whose cunning in treachery can’t help but make you smile before you cringe, and it has a great tragic heroâ€”the more he makes you admire him, the more he shatters your heart. In this production Bowen certainly finds ways to do both.

Othello plays through April 4 at the Villa Victoria Center for the Arts.