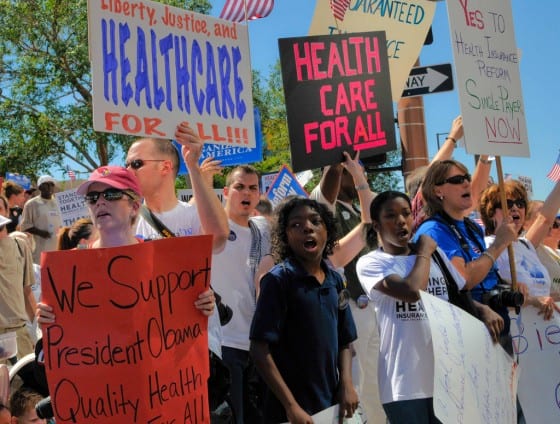 If you followed the non-stop health care coverage leading up to last night’s vote, you may be surprised to learn that Obama isn’t sitting atop the White House with a sniper rifle picking off old people one by one.

The citizen debate was passionate, at times ugly. Racial epithets and spit were hurled at black congressmen. Barney Frank, the openly gay representative from Massachusetts, was called a "faggot". I’ll leave it up to you to guess which side was responsible for this.

President Obama, a man who campiagned on the promise of uniting the country, ripped it apart in the most unlikely of ways. He created a divide by demanding more Americans be given access to health care. He’s been attacked by every side, by countless Americans and government officials, for his policy and, in some cases, his race. You have to wonder how much of the hate is directed toward the bill, and how much of it is an explosion of pent up anger from those who still can’t beleive that a young, African American with little political experience defeated a decorated war veteran from Arizona in 2008.

Anyway, back to the bill. Ezra Klein, a blogger for the Washington Post, defined the arguments against the bill quite well yesterday on Twitter: ezraklein The GOP’s argument on the bill is 1) it’s socialism and 2) it cuts Medicare too much? So, too socialist and not socialist enough?

I’ve strayed again. Apologies. Back to the bill. Of course it isn’t perfect. It’s the first major reform in almost a century. Obviously, not everyone can be pleased. Obama’s last minute deal with Bart Stupak guaranteed the bill would pass, and that deal, which ensured no federal money would go toward abortions, angered the National Organization for Women (NOW). They say Obama’s decision to issue the Executive Order shows his commitment to health care is "shaky at best". Obviously, that isn’t true, he’s put his presidency on the line to ensure more Americans have access to health care.

NOW is angry because they didn’t get what they wanted. I never thought the abortion clause would go through unnoticed or unchallenged, or, in fact, that it would go through at all. It’s just not a conversation the country is willing to have right now, and in the midst of sweeping health care reform, to get caught up on one issue, however important, is not in the best interest of the country. Obama recognized that, that’s why he took it out. But we all know where the president stands on abortion, so I really, really doubt he’ll toss it aside for too long.

Like I said before, the health care bill is not perfect. It can’t be. It never will be. But no matter who you are, or what side you’re on, you cannot possibly think the health care system in the United States is the “best in the world.” The World Health Organization ranks it at 37, just behind Slovenia. Infant mortality is higher than the European Union, largely because of lack of access to health care caused by racial and ethnic disparity, according to the Center for Disease Control and Prevention. Life expectancy in the U.S. is last among the G7 and 38th in the world, behind Cuba. In a country obsessed with being first, that’s not good enough.

This is not the “best health care system in the world.” It wasn’t before the bill, and it won’t be after the bill. But making great physicians available to a larger percentage of the population is a mark of an improving health care system. That’s what the U.S. needs to focus on right now. It’s people.