The MMA game scene is about to heat up with the addition of EA Sports MMA to the mix. Up against the UFC’s officially licensed ‘Undisputed’ franchise, it is an underdog for sure – but this new ‘Full Contact’ trailer does a great job of getting you interested:

Pretty awesome stuff! It will be an uphill battle for EA MMA though, as THQ’s UFC Undisputed 2010 hits shelves May 25th – months before EA MMA’s unannounced release date. Undisputed 2010 also includes all the fighters you really want to have: Anderson Silva, Brock Lesner, and just about everyone but Randy Coture.  UFC fighters are, with a few exceptions like Coture, strictly prohibited from appearing in any game other than the UFC’s.

EA’s title does look to feature a much greater variety of locales/ ring types, as well as different rule sets for different organizations. However, the lack of recognizable talent will surely need to be made up for with massive upgrades in gameplay, creating/careering fighters and visuals if EA really hopes to put any dent in Undisputed’s hold on the existing market. Undisputed 2009 was a huge seller and got very positive reviews, so it’s doubtful that existing players will be looking for an alternative that comes out much later and features few (if any) of their favorite fighters. We’ll see if this contest goes the full 5 rounds…

I wonder if they could agree to just hug it out? 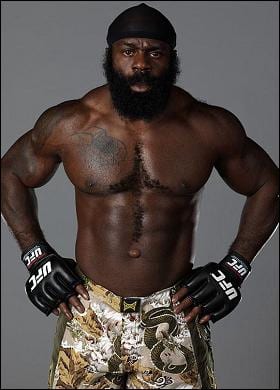 You'll see this guy in Undisputed 2010 as well.