We are the generation of Napster, LimeWire, and torrents. Needless to say, many of us don’t necessarily enjoy paying for our music. Some haven’t since 1999.

One of our favorite sources for music on the cheap, Rhapsody, recently announced its intention to re-tool their current app so that users can download any of their 9 million songs to their iPhone and listen to them even when they are in airplane mode. Users will not have to rely on a wireless signal to listen to their music and it is theirs as long as they are Rhapsody customers.

This is the beginning of a much-needed move away from streaming content. AT&T’s service sucks. We know that. Even apps that are great ideas in theory, like Ustream, fail in practice because of an over-reliance on an unreliable network. Content that you can download and use everywhere, even if it deletes itself off the iPhone after use, is exponentially better than not being able to access that content at all.

This is a great step towards increasing accessibility and transparency in content-rich apps. The concept of having unlimited access for a limited amount of time is not a new concept. It’s called a rental. It’s natural for developers to try to utilize all the bells and whistles of the iPhone, but it’s good to see that they are moving away from the streaming model towards a simpler, more effective one. 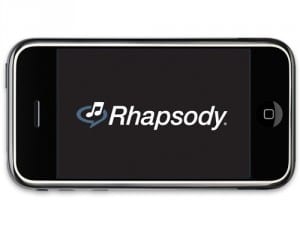 We all fancy ourselves rock stars. The vast majority of us aren’t, but that certainly doesn’t stop us from trying. When you need to rock out while on the go, turn to your trusty iPhone. Staying on the musical theme of our news section, here are three rocking apps for your rolling pleasure.

Noise Trio –– This app is a fun free one that uses tone rows to allow users to slide their finger along a matrix to create a song. Sliding sideways plays notes in the scale, up/down changes the tonality of the note, and pressing a certain cell in the matrix starts and stops a drum loop. Users can choose between three instruments: a flute, a blues guitar, and eastern bells. Each comes with their own scale, which seems limiting at first, but these scales are meant to be played in variations over and over. The guitar sounds very little like a blues guitar, but the main problem with the app is how buggy it is. When it works, however, it rocks.

Guitar Rock Tour 2 — This app is a brilliant free one for the Guitar Hero faithful. The app features the same rolling, tap based gaming interface as the console games, and has a soundtrack of classic tunes that includes “Born To Be Wild,” “Sweet Home Alabama,” and “Paranoid.” The two aspects of the app that set it apart are the ability to play drums as well as guitar, and the option to compete over WiFi with others. The app even includes a career mode that allows users to travel across the globe with their band, a nice touch to a game that really didn’t need it.

Baby Scratch — This app is predicated on the notion that we would all be much cooler if we were behind a turntable in a crowded club, scratching away. The best part about this turntable app is the ability to sample whatever your iPhone’s mic can hear, and scratch over it. The app utilizes the Flare scratch engine, which is by far the most simplistic and fun scratching experience for the iPhone. Users can also overlay beat loops on samples and control the volume with a responsive fader. The app’s lack of variety doesn’t give it much replay value, but for all of the nothing it costs, it is certainly a great value.