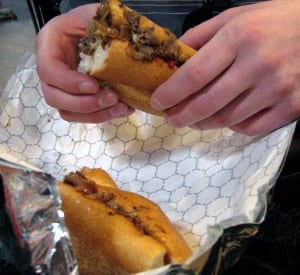 I had made him many cheese steaks. I had used hoagie rolls, fresh steak sandwich meat, and on occasion I had even fried up onions and peppers for him. Thinking back I probably should have bought some Cheese Whiz. Regardless my kitchen hardly ever smelled like sewage, but the guy wanted what the guy wanted. So we schlepped to The City of Brotherly Love, more commonly known as the city where you have to make a concerted effort to avoid getting shot, so he could check one more thing off his bucket list.

According to rumors and gossip, probably started by Betsy Ross and Benjamin Franklin or the visitors association, the first Philadelphia cheese steak was made in the early 1930s by Pat and Harry Olivieri. The brothers owned a hotdog stand in South Philadelphia and decided one day to make a steak sandwich. The rumors continue that the brothers sold the sandwich to a taxi driver who often visited the stand. The driver thought the sandwich was amazing and Pat’s King of Steaks and the original Philadelphia cheese steak was born.

If you believe that, you are probably one of the many people who will flock to Pat’s every year just to try the original steak sandwich. And while you are there the people across the street at Geno’s Steaks will probably fill you in on a completely different story as to how the steak sandwich was born. Bottom line no one really knows who actually made the first steak sandwich, but it is clear that someone did. And because of that someone, the Philadelphia steak sandwich with thinly sliced steak, on a fresh torpedo roll topped with onions and Cheese Whiz, exists today.

I am not one for controversy especially in Philadelphia. Dawdling over which steak place to eat at in South Philly just seemed like a bad idea. So, after explaining to my boyfriend that going to South Philadelphia to try one of the rumored first cheese steaks was a waste of time, we walked towards Reading Terminal Market near the Philadelphia Convention Center.

There were probably about three cheese steak selling booths in Reading Terminal Market. One booth had a line wrapped entirely around the booth. That is an excellent sign. All of the people in that line looked like they worked in and around Philadelphia, so basically it wasn’t a line full of 13-year-olds on a school trip, another great sign. The steaks were being cooked on a grill, not a flat top. And the steak sandwiches being placed in the bags were leaving a quickly spreading grease stain on the bottom of the bag. If the cheese steak is not dripping there is something terribly wrong. A puddle of grease means something terribly right is occurring.

My boyfriend bought a cheese steak and smiling like a one-year-old diving into that first birthday cake he sat down and began inhaling it. He wanted a picture of him eating his first Philly cheese steak, but all I could get was the end of the roll sticking out of his mouth. A contented smile rolled onto his face and I just knew that any cheese steak I would ever make after that moment was sure to be inferior and simply OK. Honestly I was perfectly content with that. Nothing compares to a real Philadelphia cheese steak eaten in the city. Anything that makes you hungry despite the smelly streets has to be pretty magical.

Regrettably far from the City of Brotherly Love and drooling over the thought of an authentic cheese steak? While my boyfriend may never be satisfied with my attempts at a cheese steak again after trying the real thing, it is actually a very easy sandwich to make.

Thinly sliced steak meat — Normally you can find this in any grocery store. Search near the beef section of the meat department. If your store doesn’t have good steak meat, ask the butcher if they ever sell it or if he’d be willing to thinly slice a rib eye or top round for you. It is worth a shot and will definitely taste better than the frozen steak sandwich meat. .

Torpedo roll: For this you must venture into the bakery department. In order to achieve a true Philadelphia cheese steak experience you must buy fresh bread. Look for a six inch sub roll or even a French baguette that can be sectioned off. Bread that is very hard and crusty makes for a hard-to-eat sandwich, so try to find bread with a medium crustiness.

Cheese: If you are daring and a fan of cheese from a can, go for the Cheese Whiz. There is no harm or broken rule in buying American or Provolone cheese for the sandwich.

Onions: Julienne and fry the onions up until soft. There is nothing worse than crunching into a strong onion in the middle of a cheese steak.

Fry up the steak meat in a frying pan on medium heat. It should really only take a few minutes. Flip it and cook the other side. When the meat is cooked, mix in the cheese and onions. If I’m using American or Provolone cheese I will place it on top of the meat and let it melt a little. Serve on the roll and enjoy. Don’t forget napkins. If you did it right there will be plenty of grease.

Variation: Tomato sauce on a cheese steak is called a pizza steak in Philadelphia. Just heat up a little sauce and pour it over the top of the sandwich or add it and the onions to the steak meat before melting the cheese on top.