If you ever wished you could mount a shotgun on a zebra-painted vehicle, slide around corners and hit jumps at break-neck speed, Microsoft’s "Scrap Metal" is for you.

Last week, Microsoft kicked off what it’s calling a month-long Block Party in which every Tuesday in March sees the release of a downloadable title. "Toy Soldiers," a unique tower-defense game kicked things off, next week is the hotly-hyped "Perfect Dark," but today it’s all about "Scrap Metal," a racing game with a twist.

It’s not Mario Kart or Forza. It’s not even a hybrid of the two. It’s in its own league.

As much fun as a top-down racer can be.

"Scrap Metal" is first and foremost a top-down racer. You aren’t behind the wheel and it’s not first-person. The game plays like you’re controlling a remote control car, but with heavy firepower. This mechanic works extremely well and a camera system that effectively adjusts (and never hangs up), helps the experience stay smooth and keep frustration at bay. 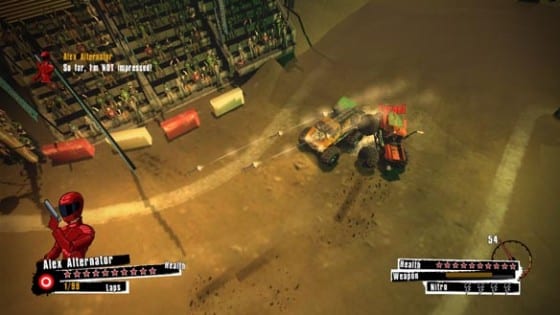 In "Scrap Metal" you do more than race for the fastest time; you barrage you enemies with a host of weaponry to make damn sure you finish before they do. Each car you unlock has its own special weapon. They range from a can-opener, machine-gun, shotgun, missile launcher and more and each is exciting, though you’ll enjoy more than others, in their own right. What’s more, when zipping around a course, you’ll encounter health packs, additional weapons and nitro to pick up. These powerups are integral to your success and should be a priority when racing around. 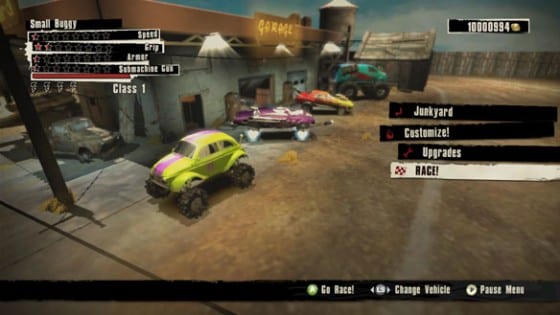 "Scrap Metal" is a racer and a demolition derby game, but it’s also more. While the game has plenty of straight-up racing missions and violent derby sequences, it also has unique tasks like VIP challenges. In these missions you must fend off a host of combatants aiming to destroy your "VIP," a truck filled with explosives. There are also "Target" missions in which you must race an entire fleet of cars but seek out and destroy one in particular. Additionally, the game progresses though unlocking different arenas to the tune of 60 single player missions and many boss battles. Needless to say, if you don’t like the course or game type you’re on, you have ample opportunity to mix it up. 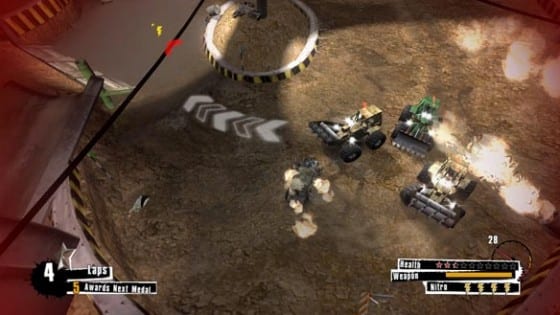 Like any good arcade racer, "Scrap Metal" has very intuitive and simple control mechanics, but as Mario Kart has taught us, honing these "basic" controls takes time to perfect. You have two options of control in "Scrap Metal;" Remote Control and Directional. The former allows control similar to an RC car where one button is assigned for gas, brakes and steering. The latter simply uses two buttons. You press the directional pad for direction and another for braking. These controls, coupled with the top-down view, are a tad disorienting at first, but definitely come into their own with time and effort.

Call me a traditionalist, but I think there’s nothing better than getting together with friends and playing the same game on the same screen and "Scrap Metal" shines in this department. Game-types like King of the Hill, the always brutal and hilariously fun Demolition Derby and Survivor, a mode where you must escape (survivor) waves of armored police and helicopters, extend the value of the game significantly and can be played both locally and over Xbox Live. 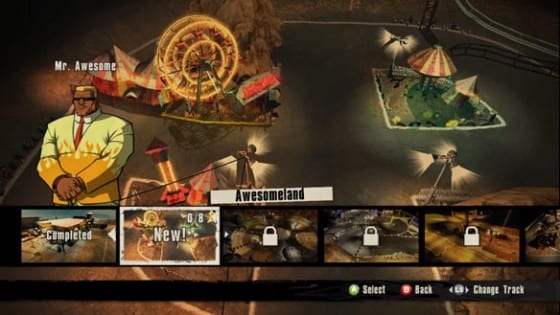 At $15, it’s difficult to say you need to check out this title, but for those looking for a quick and violent racer with a bumping soundtracks, "Scrap Metal" is right up your alley. Engaging single-player, based on unlocking cars and weapons and upgrading those weapons, becomes addictive and putting this title down won’t be easy.

Look for our interview with developers Slick Entertainment later in the week and our review of "Perfect Dark" this time next week.

Scrap Metal was released on the Xbox Live Arcade March, 10 and retails for 1200 MS Points ($15). A copy of the game was provided to us for review purposes.