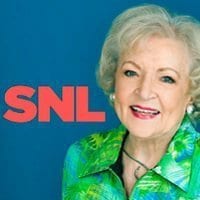 It took nearly half a million fans on Facebook and countless more clamoring and begging for it happen, but it WILL happen.

The legendary 88-year-old actress confirmed after the Academy Awards at Elton John’s Oscar party that she will appear on the NBC sketch comedy show, but she did not say when.

White’s name surged after her Snickers ad during the Super Bowl:

Betty White has been entertaining for more than seven decades.