The world gets smaller and smaller everyday as social networking Web sites continue to gain more traction with users throughout the world. It seems only natural that the evolution of these sites is towards targeting specific interests.

Enter Indaba Music, a social networking site geared towards musicians with a collaborative bent. The name perhaps sums up the cloud-based Web site better than anything else, as Indaba is a Zulu word for collaboration and community. 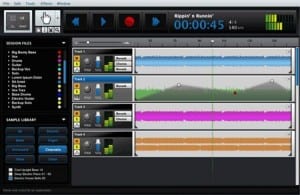 Through Indaba, musicians anywhere in the world can create profiles in which they can share musical interests, influences, recordings (called sessions), photos and blogs as a means to connect to other musicians with similar interests and direction.

An intuitive search function, common interest groups and Indaba recommendations allows users who share something in common to find each other, from which collaborative sessions can begin. Sessions, hosted by Indaba’s Session Console 2.0 software, can be public, like an audition, or private, in which users can record, mix, edit, exchange tracks and even pay people.

Indaba’s most enticing feature is the ingenious Session Console 2.0. The console utilizes the cloud while engaging user’s processing power from their computers to record high quality, uncompressed audio straight to the session. In addition to high quality audio, the console features an offline mode that all but eliminates the need for GarageBand or Audacity, along with real-time hosted effects, non-destructive editing and a licensed loop library called the Creative Commons. The console also allows for commenting by showing tracks in waveform and allowing users to comment on specific moments in the wave, a much more effective method of notation than saying, "the third beat in the second bar of the bridge."

While this does not sound like much, anyone who has played music in a collaborative setting can attest to how invaluable the commenting tool is. The most impressive thing about the Session Console 2.0 is its simplicity, which allows any user, regardless of editing experience, to edit their creations within minutes of starting to use the console.

Indaba doesn’t stop here; they also engage their users by offering remix contests of popular songs, A.I.R. (Artists in Residence) who offer lessons and featured sessions that anyone can collaborate on, sometimes with established artists.

A common interest and a strong sense of community have allowed Indaba to reach over 200,000 users in over 185 countries with no sign of slowing down. Indaba’s value, however, is not just in its social networking aspect but also in its extremely impressive software that makes it easier than ever before to record high quality and well-edited audio without ever spending a penny. The Web site also seems to be a model of what is possible when both the convenience of the cloud and the power of the personal computer are integrated into software. What’s more, Indaba genuinely seems to care about building a healthy community based around a common love, an admirable quality that more niche social networking sites will hopefully adopt. If you’re looking for the future of social networking, and maybe a new artist to check out, you need look no further than indabamusic.com.