The latest cinematic version of Alice in Wonderland hits the theaters today. It’s the sort of movie that millions of people love before they’ve even seen it. It’s a strange story tale for sure, but one could argue that the weirdest character connected to it won’t be seen on screen at all: the author.

Lewis Carroll, the 19th century Englishman whose real name was Charles Lutwidge Dodgson, did more than pen a series of books that’s way trippy even without Tim Burton’s imagination. When not teaching math at Oxford, Carroll did odd hobbies. He was into cryptography and word games and created (among many other things) a game similar to Scrabble. His came up with new weights and measures, systems of postage, and ways of gambling. He made weird inventions like a device to write notes in the dark using one of his invented alphabets. 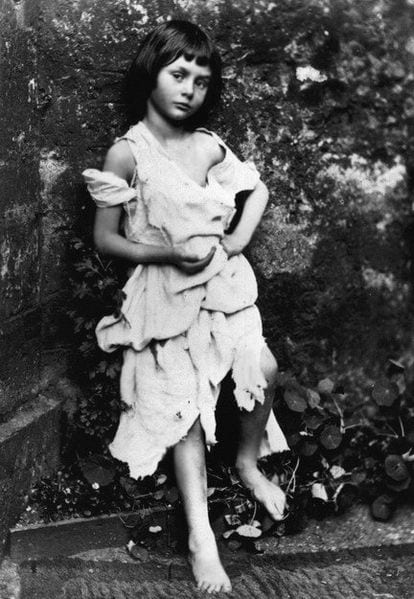 This photo of Liddell dressed up as a beggar-maid from 1858 has been digitally retouched.

But none of these quirky diversions are as shocking as his interpersonal life, and there’s no way to say it except to come out and say it: It’s widely believed had a thing for little girls. Yes, THAT way. And by little girls, I mean from really little up to about Lolita age, give or take a year.

Carroll, not a bad-looking guy, is supposed to have had no interest in adult women. In fact, he didn’t care much for adults in general. He far preferred the company of young girls with whom he would dine alone in his quarters. In Carroll’s mind, the difference between adult and child was laden with metaphorical dichotomy: corruption versus purity, subterfuge versus honesty, disinterest versus wonderment.

This, and the theme of transformation, is expressed throughout his works. It starts with the "drink me bottle" and the "eat me cake" Alice finds upon landing in the rabbit hole. Given a psychedelic update in the 1960s, these became Jefferson Airplane’s one pill that makes you taller and one pill that makes you small. Wishing kids could have the perks of adulthood without growing up, Carroll fantasized about ways to control the process.

You’ll be grateful to know that almost no one claims he actually consummated any of his infatuations. You’ll be less glad to know Carroll’s other major hobby was photography. Unfortunately, we’re talking (as Eric Idle once said in a skit) "CANDID photography." Snap snap, nudge nudge, say no more.

Alice Liddell, the young girl upon whom the fictional Alice was based, had a relationship with Carroll that started when she was four years old. There’s no indication that she was ever photographed au natural by the author, but the infamous "Beggar Maid" photo is a cause for concern. In it, she wears a sort of tattered nightgown. The photo is carefully posed, so what it reveals can’t be blamed on a Janet Jackson wardrobe malfunction. Say no more.

Other photos taken by Carroll are of fully naked children. Of these, only a handful survive, and they’ve pigmented so they look more like oil paintings than photos. Even so, they’re not the sort of thing most folks want found on their hard drives.

Most scholarship about his sexuality can be summed up as follows. "Dodgson? Oh yeah, HUUUUUUUGE pedophile. Very repressed, probably didn’t even know it himself. But still."

Yet for every general consensus there are revisionists who challenge it. Some say that Carroll’s photographs were considered fashionable by his Victorian contemporaries who were used to seeing, for example, naked kids posing as cupids on greeting cards. Some look at his diaries and claim he actually was dating adult women, and possibly even gettin’ some. They note that Carroll’s intense relationships with children were considered a bit idiosyncratic, but no was got wierded out enough to sound an alarm.

When Alice Liddell was 11 years old, her mom put an end to her relationship with Carroll. But there was no scandal, and Carroll went to his grave decades before people started calling him a pervert. Even in her old age, people with questions about Carroll would "go ask Alice." His former muse had nothing terrible to say about him, nor did any of his formal girlfriends, some of whom kept in touch with him after they were married.

If Michael Jackson made and openly displayed the types of photos that Lewis Carroll did, the King of Pop might have gone to jail for child pornography even if he beat molestation charges. That penalty, and the scorn that goes with it, is something we’re enculturated to expect. But outside the realm of familiar expectations, it’s harder to make judgments using same mental, moral, and emotional tools that usually serve us well. It may be tough to know how we should feel about Carroll’s proclivities which were (albeit some just barely) within the societal norms of his day.

One last bit of good news. Mia Wasikowska, the actor who plays Alice in the new movie, is 20 years old. If you can’t get Carroll out of your mind, her age alone should cut the skeeve factor way down.