Following up a mediocre original, Electronic Arts and Battlefield developer DICE, had a lot to do in the "make good" department with Bad Company 2.  Sappy dialogue and an overly cheesy story plagued the original, but none of that returns in the sequel.

Best known for its online multiplayer PC efforts, the Swedish developer unleashed a fair rival to Infinity Ward’s "Modern Warfare" on Tuesday and is a must-play for first-person-shooter fans.

While the original was critically viewed as somewhat of a lighthearted affair, the sequel bubbles with fast-paced action, compelling narrative and of course, the best multiplayer available anywhere.

Clearly gunning for "Modern Warfare 2," EA pulled it off with Bad Company 2, as in many ways, is a superior game.

It feels so good to take it down.

Bad Company 2 was built, like the original, employing DICE’s proprietary Frostbite game engine. This under-the-hood capability allows for anything and everything in your way to be eviscerated in the blink of an eye. While raiding a camp in South America you could, in theory, pick enemies off one by one by lurking around the perimeter, but you can also equip your grenade attachment and blow the bitch to smithereens. This game mechanic makes the game a highly dynamic and ultimately strategy-based affair. The game environment persistently changes as a firefight progresses. Cover is broken up and destroyed, leaving your enemies in plain sight, but it also works the other way. 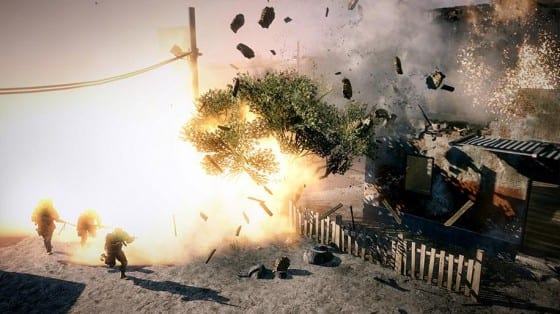 Often times throughout the game’s campaign you’ll pilot a boat, fight on foot and man a machine gun on the back of a speeding jeep, swapping from one to the other to the other in the course of mere minutes. This persistent variance allows the game to remain fresh and never dry or dull. In one particular level you’ll rip through a rural town with an Abrams tank, dismount, pop some bad guys in the dome, then pilot a UAV and rain fire down on rooftop RPG-wielders. It may sound schizophrenic and jumbled, but it actually works extremely well.

You put strong narrative in my FPS!

First-person-shooters are notorious for their lackluster and wholly unbelievable narratives, but Bad Company 2 doesn’t follow suit. The game opens with a very intriguing narrative approach (which I will not spoil) and it only gets better from there. Though the general plot is very predictable and consists of you and your burly squadmates stopping a Russian from launching a super weapon, you’ll grow attached to the characters because of DICE’s strong story-telling capability. Voice acting is phenomenal in Bad Co. 2. Every phrase feels genuine and this time when the guys joke around, it’s at appropriate times and is appropriately phrased. Cutscenes in the game are also well-executed. Whether it’s watching Marlowe sneak behind a sniper, slice his throat and watch the blood splatter or listening and watching the evil Kirilinko pace a room announcing his devilish plans, these scenes play out like film and are truly enjoyable to watch. 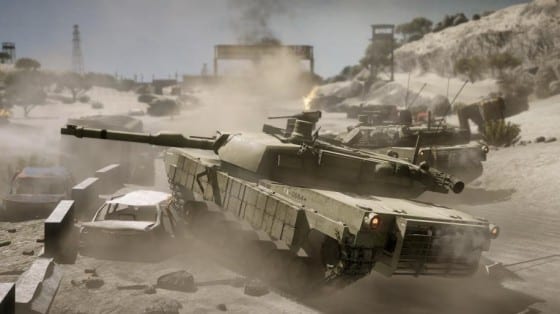 Just one piece of the vehicular puzzle.

Bad Co. 2, as you’d expect, is full of weapons. Everything from the one-shot kill sniper rifle to silenced machine guns to the 12 inch jungle knife, proves the team at DICE know what’s what in the weapon department. As you traverse the game’s levels you’ll find weapons. When you pick up a foreign weapon, it’s added to your inventory which you access through the very useful "Crate" mechanic. At many places at many times during each level a crate will appear and accessing it will stop the game and allow you to resupply and change your primary and secondary weapon, based on what you’ve already collected. This is expressly useful when standing atop a hill looking down at a camp with a light machine gun. Access the Crate quickly and you’ve got a sniper rifle with devastating force. 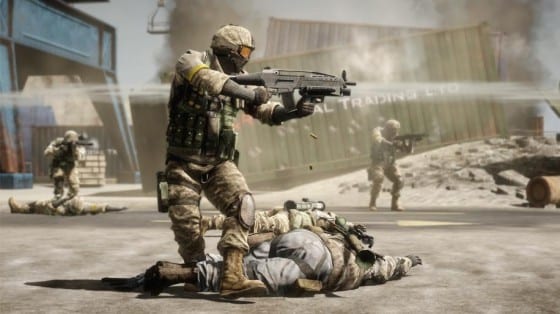 You look so good I could eat you

Bad Company 2, for lack of better phrase, is one sexy bitch. Throughout the campaign you’ll travel across hemispheres finding yourself sometimes in lush forests with flowing water and other times storming a bitterly cold frozen encampment. The commonality among these varied locations is how gorgeously they are rendered. What’s even more compelling is the game’s draw distance, that is to say, how far the eye can see in the game. At times you’ll sit perched atop a hill and rain sniper fire down on infantry storming from east and west hundreds of meters away, and it’s easy and beautiful at the same time. Bad Company 2 is definitely one of the most graphically-stunning games on the market today. And to achieve such fidelity without a second of lag or drop-in, is quite a feat. 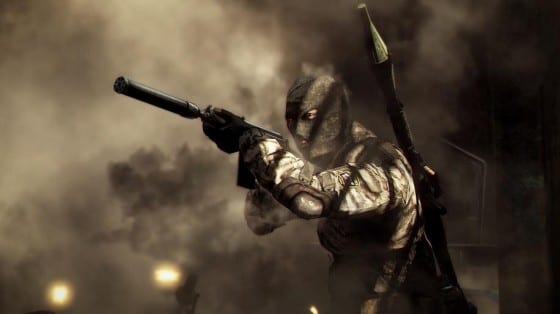 It really looks this good.

It’s really all about the multiplayer

As compelling and strong as Bad Company 2’s narrative and single player experience may be, it all deeply pales in comparison to the game’s multiplayer component, and this is no oddity. DICE has been making Battlefield games for over a decade and in that time proven itself to be a guru of multiplayer design and execution. Bad Company 2 offers a deep, engaging and fun multiplayer component, the type you don’t just play, you love.

Its use of vehicular combat is staggering in its excellence. Everything from pontoon boats to helicopters and even jet-skis are yours to use and are central to a team’s success or failure in any given match.

In terms of game-modes, it’s pretty straightforward. Here’s the breakdown.

Squad Deathmatch– This mode pits four squads of four players against each other in a battle to 50 kills. These games are (relatively) short, fast paced and resemble the multi-team playlist in Halo 3.  If you’re looking for something similar to Modern Warfare 2, Squad Deathmatch is as close as you’re going to get.

Rush– This is the game type found in the demo for both the PS3 and Xbox 360, so you’re likely already familiar, but if you aren’t, it’s simple. One team defends a series of Comm-stations, while the other attacks it.

Squad Rush– Obviously similar to Rush, this mode pits two squads (4 teammates) against each other in a frenzied head-to-head battle over two Comm stations.

Conquest– This is a flag capture game mode pitting two teams of up to 12 against each other in a battle to control flags by defending them and capturing others. Needless to say, this mode is extremely fun, engaging and so very addicting.

With a host of environments ranging from the cold, snowy and desolate to a hilly, jungle map where you can pilot boats, drive tanks and fight on foot, the game’s multiplayer will keep you engaged for countless hours. Furthermore, an unlock system and perk system, similar to that of Modern Warfare 2’s, allows you to unlock and collect more powerful, accurate and deadly weapons and attachments for both weapons and vehicles.

A few times (many I likely missed) throughout the game’s campaign, DICE pokes fun at its rival in some hilariously performed cutscenes. These include a scene where characters say "snowmobiles are for pussies," clearly making fun of MW2’s snowmobile sequence and a segment referencing how heartbeat sensors and special ops are silly. They are lighthearted, sure, but their intent is clear. 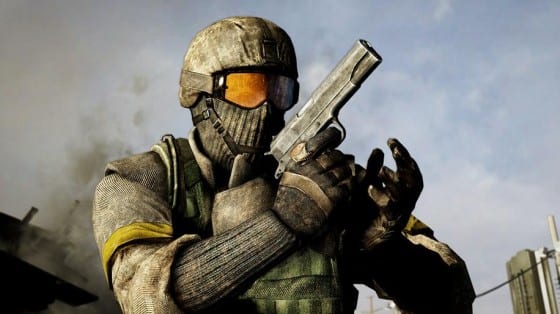 Blast Factor: Battlefield: Bad Company 2 is better than Modern Warfare 2. Its story is richer, its scope larger, and its multiplayer far more compelling. DICE displays mastery in both vehicular combat and hot and heavy first-person-shooter goodness spanning both the campaign and multiplayer, a feat rivaled by none on the market today. Its campaign is short (about 7 hours), but it makes up for it in a multiplayer component you’ll likely log hundreds of hours in before you’re done. Bad Company 2 is a must-have for fans of first-person-shooters.

Battlefield Bad Company 2 was released March 2 by EA DICE. It’s available for PC, PS3 and Xbox 360. Game was finished in its entirety on Xbox 360 on the normal difficulty setting. A copy of the game was purchased for review purposes. Kill ’em all.