With this week’s release of Final Fantasy I and II, and recent launches of Doom II and Wolfenstein, an exciting trend in iPhone applications is developing– relaunches of classic yet outdated video games on your iPhone.

It’s pretty cool that the iPhone has become a medium advanced enough that classic games can be even more playable on it than they were on their original consoles. Classic video games have lacked the long-term staying power in the public conscience largely because the rapid improvement of gaming technology makes fairly new games seem wildly outdated.

The iPhone’s technology has allowed for the resurrection of these classic games and will hopefully pave the way these exceptional games to be enjoyed long after their spotlight in console gaming has gone. Gamers are certainly more forgiving in what they expect from their iPhone games as compared to their console games, and since classic games are already developed, iPhone users could see a boom of classic games hitting their iPhones in the coming months. Come on, Rareware, give me GoldenEye! 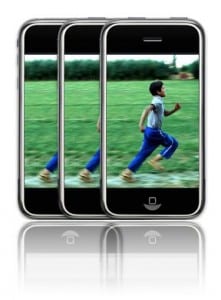 Now that it’s March, the season for enjoying a nice outdoor run without returning home as a Popsicle has begun. Runners need to find routes, keep statistics, and track calories burned. Blast gives you reviews of three popular running apps for your fitness pleasure.

iMapMyRun: This app is a good free alternative for a lot of the run tracking paid apps on the App Store. Walk out your front door, hit start and run. iMapMyRun will mark your route using Google maps, and keeps vital statistics like distance, speed and elevation. When your run is over, go to MapMyRun.com, where all your statistics will already be uploaded, allowing you to delve deeper into all the aspects of your run. You can also enter in data from gym workouts, making this app a free one-stop shop for all your fitness needs. Simple and excellent execution for a free app.

iRace Me Lite: The best motivation for runners is to race against their fleet-footed brethren. Even better motivation is racing against yourself. iRace Me Lite allows users to create a loop, run it and then next time they run the loop, see where they are in relation to their previous run in real time. The obvious drawback for the app is runners continually checking their iPhone instead of running full out. This is a neat concept, however, and the addition of audio cues can all but eliminate the need for runners to pull out their iPhone, making this application a must for seasoned and novice runners alike.

Fitnio: Essentially the statistics that you would see on a treadmill on your iPhone. Adding calories burned to distance, speed and pace is a nice touch, but it is hard to see how the developers of this app can justify charging $1.99 for it. Sure, it has warm up and cool down functions, as well as a field for emergency contacts, but that is about it. The app does have a feature for cyclists as well as runners, but if you’re rolling on two feet instead of two wheels, Fitnio is a waste when compared to other free running apps.