In his introduction the new Del Rey printing of the actual Inferno poem, Executive Producer and Creative Director of the Dante’s Inferno game, Jonathon Knight, clearly displays a great deal of knowledge and passion for the source material. Yet, after playing the game you’d be hard-pressed to find a love of literature within the game’s stylish and violent look at the Christian mythos of hell. That’s really the problem with taking something as historically and literally treasured as Dante’s workâ€”its potential depth is merely squandered on the limited vision of EA Games and developer Visceral Games.

Visceral (and Knight) previously created the exceptional dark and involving Dead Space. What made Dead Space great was that it looked at survival horror and took it in a new environment (space), plus added the focus of tightly-paced, nerve-wracking shooting action. It wasn’t stunningly innovative, but still felt different. Dante’s Inferno, on the other hand, seems to serve one of two purposesâ€”depending on your platform preferences.

If you’re a Sony gamer, the game is squarely aimed at giving you something to do until God of War III hits in March. For Xbox players, Dante’s Inferno is the absolute closest you’ll get to Kratos’ saga. As a game, Inferno seems hell bent on emulating Sony’s franchise in almost every way.

Dante’s poetic epic provides a suitable alternative setting to the Greek god locations. This view of hell comes with nine sin-themed circles, so it’s perfect for a video game setting. Instead of gods as bosses, we have historical and demonic figures that guard each circle and must be dispatched in gruesome, cinematic ways. Most bosses are epically huge as well, and combat is the exact same cross between hack and slash and Simon-says-level Quick-Time-Events (QTE).

You actually play as Dante, in his angry quest to free his beloved (and dead) fianc©e, Beatrice, from hell, which is somewhat nobler than Kratos’ psychotic narcissism. And yet, Dante is hardly more likable a character. He’s a self-centered, angry hypocrite, who has committed outrageous atrocities in the name of his god during the Crusades. Thankfully, he manages to gain some minor redemption through the game. 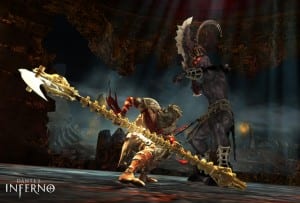 The action is remarkably solid. Instead of swinging blades, Dante wields Death’s Scythe. It’s a handy weapon of mass carnage with good reach and plenty of combo potential. More importantly, the weapon is fun to use against the poor, foul denizens of hell. Aside from light and heavy attacks and combos, you can "grab" enemies with the scythe by impaling them, then either punish or redeem them. Either choice results in experience points for your holy and unholy abilities. There is an easy to use skill tree where you spend these points, and as you build up one side or the other, new and more powerful abilities are opened up.

Although it might be possible to focus on either the holy or unholy sides of Dante exclusively, you’ll ideally build both up to gain the best of both worlds. Building Dante’s abilities makes him much hardier in battle and by the fourth or fifth circle, he’ll feel like a real Templar badass. Throughout the game, Dante will mount bizarre and gigantic creatures of hell, although the controls here are noticeably cumbersome.

From the perspectives of visual design, Dante’s Inferno is a mixed bag. The visuals are gorgeously grotesque when the game really stretches its creative muscles, but each circle is actually remarkably small and has an absurdly limited number of special enemies. The game also simply doesn’t get freaky enough in its design. Some of the bosses are hilariously macabre, but why is the only lust demon simply a topless harlot with a whip-like womb? Sure, it’s weird, but after the fifth fight with one, you’ll be wishing for some creepy and nightmarish variety.

Worse, after a while, the game just seems to give up on variety. You’ll fight endless hordes of faceless, pot-bellied damned souls, along with the other more powerful demons, but by the end you’re just fighting the same few types over and over. There’s little level exploration as well. Each circle has some secret treasures, but the levels aren’t big enough to make finding them much challenge.

When not killing endless hell spawn, Dante is usually double jumping, climbing, or swinging his way through death traps. Many of these sections, especially when he must swing quickly from one burning rope to another are incredibly intense and fun. On the flipside, other levelsâ€”especially the city of Disâ€”almost feel like cheap filler material.

Another weak area that could have been much more is the historical damned souls Dante encounters. These are figures from history that are usually hidden away and Dante can punish them further or absolve them. It adds some minor historical relevance to the overall story, but has so little effect on the gameplay that they seem like a wasted opportunity for adding meaty sub-quests and levels to the otherwise completely linear game.

Blast factor: How much you’ll get out of Dante’s Inferno depends on expectations. Download the demo first, or just play one of the God of War games. If either appeals to you, then Dante’s Inferno provide plenty of gory entertainment for the span of its nine or ten hours. But don’t expect a shred of any depth here. The game is purely surface country meant to emulate God of War with amazing precision. That’s not a bad thing, because Dante’s Inferno is easily the best example of this genre since God of War II. EA hardly had to mine classic literature for such a task though, and overall Dante’s Inferno really seems like a missed opportunity to create something truly interesting and bizarre.

A copy of the game was purchased for review purposes.