Return to Rapture once more, the home of one of the most highly regarded games of the last decade. Bioshock 2 was greeted by both cheers and worry when first announced. Cheers because, well, people wanted a sequel to the grand original. Worry because the sequel wasn’t being developed by Irrationalâ€”who made not only the first game, but some of the greatest PC games ever (Thief, System Shock 2, and many others).

The good news is that despite its maze-like development involving four different development studios, Bioshock 2 is excellent. Instead of playing the prodigal son as in the original, you’ll take on the huge diving boots of the first Big Daddyâ€”known only as Delta. It’s 1968â€”ten years after the death of Rapture’s megalomaniac founder, Andrew Ryanâ€”and Delta awakes to find a very different place than he might have remembered when first created.

The vacuum of power among the mostly insane, plasmid-addicted populace of Rapture has shifted to Dr. Sophia Lamb, a psychiatrist detractor of Ryan who emerges from prison after Ryan’s death to push a policy of socialism and equality for the remaining denizens of the undersea city. Lamb is so obsessed with the idea of community over the individual that she doesn’t care about individual life at allâ€”even her own daughter.

For Delta, however, Lamb’s daughter has a much greater significance. She was his little sister, and he’s hardwired to protect her. As it turns out, she needs to be rescued and Lamb will try her damnedest to make sure Delta can’t get to her. It’s an intelligent and even poignant set-up for the sequel, and the story builds in the same way as the first Bioshock. Mysterious allies will aid you, voice recordings spread throughout the levels help flesh out what happened before you got there, and there’s always some new task to complete to continue onward.

Although Bioshock 2 is, on the whole, not far removed from Bioshock, there are several key differences. First of course is that you take the role of a Big Daddy. Granted, he’s not as massive and powerful as the mindless lunks roaming through Rapture. Delta is more maneuverable, but not nearly as tough as the garden variety Daddy. Add in new rumbler-type daddies, and Delta feels positively light weight. 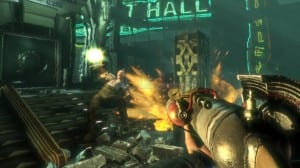 Combat feels a lot more integral to the game as well. Although always a focal point in Rapture, Delta faces hordes of splicers at a time, most of them with firearms. As it turns out, guns hurt Delta nearly as much as a regular man, and even melee weapons seem to hurt him rather unduly. Granted, you’ll be upgrading yourself through the entire game, so Delta gets tougher.

Another seemingly minor, yet ultimately important difference is the ability to use plasmid powers with your left hand and weapons in your right. This makes one-two attacks like an electrical stun followed instantly with a well-placed shotgun blast or grisly drill easy and amazingly satisfying. Laying traps is another tactical element. You can set explosives, electric lines, and hack turrets and cameras, along with security bots.

Tactical thinking is often incredibly important here, especially in regards to the Little Sisters. There are two ways to handle Little Sisters. The first is heartlessly harvesting them for ADAMâ€”the substance that enables everyone in Rapture to have super powers. The second way is to carry them to safety, thus saving them. Along the way though, these creepy, glowing-eyed girls can sniff out ADAM-loaded corpses. Once you set them to task of siphoning out the substance, however, the ADAM-addicted splicers start coming out of the woodwork.

You’ll have to fend off splicer attacks from all directions until your Little Sister is done, and preparation for the battle is key. Once you’ve rescued (or harvested) all the girls on a level, a so-called Big Sister hunts you down. Despite all the hype about these new creatures, Big Sisters are actually an incredible let down. Aside from there being no explanation about who (or even what) they are, they are amazingly cheap and over-powered. Flinging weapons and plasmid powers at a far faster rate than Delta can, you’ll inevitably have to rely on the regeneration chambers to enable you to continue to chip away at their health.

Depending on the location, there are occasions where even these battles shineâ€”such as luring them into a pool of water and shocking the daylights out them, or hacking a camera and sentry gun. and then getting them in range for extra firepower. Big Sister problems aside, as long as frantic combat doesn’t bother you, there’s little to complain about. Bioshock 2 really doesn’t feel much different on the whole from Bioshock. In fact, it just feels like a beefed-up version of the original. Your character is bigger, enemy battles are more intense, and thanks to the occasional trip into the open waters Rapture feels more expansive too.

Finally, there’s the multiplayer. It seems extraneous on such a pitch-perfect single-player saga, but 2K has managed to add a remarkably interesting gimmick. Multiplayer matches are mechanically much like any other team and free-for-all game. The hook is that you can choose from a variety of characters, augment them with weapons and plasmids just like the single-player game, and engage in a setting that takes place before the fall of Rapture. It works well, and it’s fun, but time will tell if it catches on.

Beyond that, Rapture still looks beautiful and offers an incredibly immersive audio experience. In the end, the only real complaint is that this return to Rapture feels all too familiar. Delta offers only a marginal change in playability and the environments themselves are much the same as before. In a lesser game, this would be a real problem, but here the familiar is entirely welcome. So enjoy another stay in Rapture, soak in the surroundings, and cause plenty of carnage. You’ll be glad you did.

Blast Factor: Bioshock 2 is a welcome return trip under the sea. Gameplay refinements and a new character help make it feel fresh again, but Rapture itself is still the same den of insanity it has always been. Collecting an array of new and old plasmid powers, combined with newer, more powerful weapons gives combat more bite. The oppressive feeling that the entire world is against you adds even more great atmosphere. While Bioshock 2 doesn’t feel like an entirely new experience, it’s just what a good sequel should and well worth your time and money.

A copy of the game was purchased for review purposes.