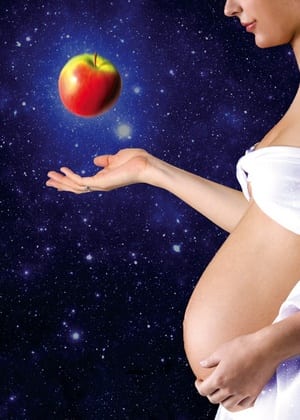 This play calls for some serious ovaries.

Perhaps the Lyric is seeking to restore balance after staging an all male three-person drama.

But even if I did have ovaries , I’m not sure how captured I would have been by this didactic, low-stakes, historical comedy about women in science, a New England premier from  playwright Karen Zacarias, staged by guest director, Karen Roach.

The cast is not to be faulted hereâ€”they are generally a skilled and charismatic bunch lead by Sarah Newhouse and Diego Arciniegas (the long-time Boston actor and Artistic Director of the Publik Theater), as historical figures, ‰mile du Ch¢telet, an under-appreciated Enlightenment-era physicist , and her far more celebrated lover, Voltaire.

The problem with the play has more to do with its structure. "Legacy of Light" switches back and forth between two settings.  Its French Enlightenment plot is based around ‰mile du Ch¢telet’s race to complete a scientific discovery before giving birth to her second child, an act which, given her advanced age and declining health, she fears could be fatal. Its second setting is modern day New Jersey, in which a thematically linked plot emerges around Olivia (Susanne Nitter), a successful astronomer who, unable to give birth herself, hires a surrogate, a quirky aspiring fashion designer named Millie (Rosalie Norris) who needs the money more than she immediately lets on.

Part of the problem is that neither of these "conflicts" involve much conflict. There are some decisions to made, but their results are never really in doubt. There is the possibility that Olivia (or Millie) may turn out to be a bad mother, or that Millie might not give up her baby, but these threats are vague and never pushed very far. We learn that Millie has a secretâ€”but it’s not a particularly damning one. Olivia’s husband Peter (Allan Mayo, Jr.) is threatened at one pointâ€”but it’s a threat that lasts a matter of seconds.

There’s the possibility of ‰mile du Ch¢telet’s imminent death, but then, as we are reminded by the characters themselves, they are already dead, their legacies determined. This introduces another serious problem with the play: the treatment of its most compelling characters, ‰mile du Ch¢telet and Voltaire.  Rather than letting her interpretation of these characters unfold, Zacarias faces them outwards, having them introduce themselves and then summarize their lives, feelings and accomplishment, rather than playing them out before us. Similarly, she stages opportunities for Olivia to lecture as well, all but spelling out the connections she sees between science and motherhood.

So there’s not much to grip us here. No mystery to solve and not much room to explore, with the characters reliably informing us both what they think and how they feel.

It doesn’t help matters that the production is set less in the three apartments the script calls for, than in a nebulous region of stay-speckled sky, with a large tree growing prominently from its blue floor. In other words, like the playwright, the designer offers a theme rather than a compelling, complex reality.  It isn’t even a blank space on which to project our imaginationâ€”it’s in fact rather crowded, as we learn in the first scene in which ‰mile du Ch¢telet’s lovers fence with long foils across roughly four feet of stage. It’s as awkward an exchange as the love scene that precedes it.

The structure of" Legacy of Light" is reminiscent to that of "Arcadia," Tom Stoppard’s masterpiece about impossible quests for knowledge, which also switches between two historical settings and which features a fictional female physicist who, like ‰mile du Ch¢telet, studies Newton and is linked to a famous historical writer (her tutor’s friend, Lord Byron).   "Arcadia’s" the two plots are not merely thematically linked. Both take place within the same house. The scholars of the play’s modern setting come into conflict while seeking to unravel a mystery that we see revealed in the play’s historical setting. One set of scholars in conflict is studying a second. "Arcadia" is in a sense a play of ideas. It is academic and cerebral. Above all though, it is sold by the intense, complex and moving relationships between its characters, the comedy and pathos of their thwarted romances, as chaotic as the world upon which they try to impose order.

Zacarias’ play is built on some interesting ideasâ€”like the idea that a woman’s natural ability to give birth can both uniquely aid and uniquely thwart her other creative powersâ€”but  she misses the fact that in a play of ideas, the characters and their conflicts can’t also simply be ideas. They in fact have to be almost twice as vital, their struggle, almost twice as urgent, and just as earth-bound, detailed and concrete, as the ideas behind them are lofty and complex.

I am glad that ‰mile du Ch¢telet’s is getting some attention, here, and I hope it so happens that any woman who sees this play will be inspired to be as creative as the best physicists, fashion designers and mothers.

But I’d like to have seen a little more data to support this hypothesis.

"Legacy of Light" plays at the Lyric Stage Company through March 13.