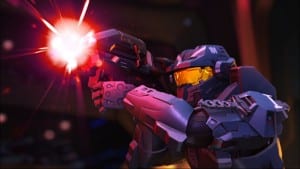 Roughly 540 years in the future, the human race is at war with an intergalactic alliance of alien races called the Covenant. A genetically engineered warrior — the last of his kind — fights fervently to drive back the advancing alien force. Soldiers of the United Nations Space Command fight at his side, know his name, and spread his legend, Master Chief John -117. Welcome to the universe of Halo. Climb deeper into it — or explore it for the first time — with the animated feature that hit shelves last week.

The seven animated stories in “Halo Legends” unfold over eight episodes. The artificial intelligence Cortana narrates “Origins,” the first two animations in the set. The plot gets somewhat labyrinthine as she explains the origins of all life in the fictional universe. A trip to the Halo Wiki might help, if you get lost.

“Origins 1” — narrated to the unconscious Master Chief — details the rise of what are called the Forerunners. Cortana tells Master Chief that these advanced beings reached technological heights thousands of years ago. It was all fun and games until they met a biological terror called the flood. The flood was to the universe what a really bad virus is to your hard drive; to wipe it out you have to wipe out your hard drive. The Forerunners fixed the problem by wiping out all living things in the galaxy. But they were smart. They backed everything up and started from scratch. Once the universe was rebuilt, human history could begin.

“Origins 2” picks up were the first one left off. Humanity, it turns out, was rather good at making war. Once humanity spread to the stars the ability to blow itself to kingdom come became cool on a whole new level. Fighting over land and resources was equally fun in space. When the Covenant joined the party, humanity turned their attention away from killing each other and toward killing the aliens. Then the flood showed up again, and the real fun started. These two stories bring you nicely to a place where you have some idea of what is going on if you are unfamiliar with Halo.

“The Duel” quickly puts places you in unfamiliar surroundings, where you have no idea what’s going on. The story takes place on the alien world of the Elites. The water-color style animation follows the Arbiter, a general of his species, as he defies the Covenant. The Covenant has another Elite fight him in a Samurai-style duel. By this point, it would be nice to see some Spartans kill some aliens.

“Homecoming” gives you just what you are thirsting for: alien blood, and lots of it. The story intertwines with a flashback. Daisy, a Spartan who wears red close-quarters battle armor, is helping some soldiers escape an over-running Covenant force. As she assists them, by blowing aliens of various sizes away with a shotgun, she remembers attempting to escape from the facility where she was turned into a Spartan. 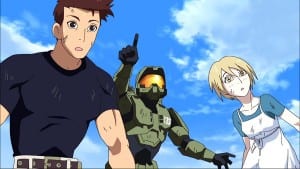 “Odd One Out” raises a new question for Halo fans. What if Halo was more like Dragon Ball Z? A Spartan falls out of a passing ship. When he hits the ground he encounters kids dressed like cavemen whose dinosaur tries to eat him. The children have a big brother and big sister who help the spartan fight a crazy Brute creature. Just when you can’t stand any more ridiculous antics it ends.

“Prototype” provides some relief by being pretty awesome. This sergeant is trying to get his men to safety after executing a mission. He does this by using an armor suit of high-tech weapon systems to blow tons of Covenant forces off the face of the planet.

“The Babysitter” details a mission where Orbital Drop Shock Troopers deploy with a Spartan. In the course of their sniper mission together the team and the Spartan earn each other’s respect. The Spartan has to buy a Gravity Hammer in the face to do it, but there has to be some downside to being a super-soldier.

“The Package” delivers the goods. It does this by answering an important question. Where the hell is Master Chief in these stories? Not only is there quite a bit of Master Chief, there is quite a bit of shooting aliens and even some first person animations.

Overall the feature contributes to the lesson of Halo. Generations to come will learn that if there is one thing aliens need it is to be shot in the face, or stabbed in the side of the head with a close-combat knife, or even smashed in the skull with the butt of a rifle.