Based on the animated series, Warner Bros. will bring “Batman: The Brave and Bold The Video Game” to Wii and DS this year. Gamers will be able to play as DC Universe characters Batman, the Green Lantern, Robin, Blue Beetle and Aquaman in the cooperative game. 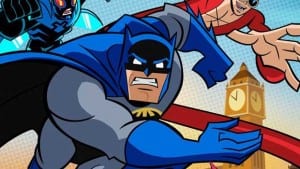 What’s more, the game will feature Wii and DS connectivity. If you own both you’ll be able to unlock the Bat-Mite as a playable character and using the DS as a controller will be able to control the little guy in the Wii game.

Sure, it’s no “Arkham Asylum 2,” but Wii and DS gamers with Batman on the brain have at least something to look forward to.

No screenshots or video is available for the game just yet, but when it surfaces, we’ll be on it.