Busting the brains out of Nazi Zombies was so very fun in “Call of Duty: World at War,” but “Modern Warfare 2” developer Infinity Ward today said gamers should not expect zombies to come to the modern day shooter. 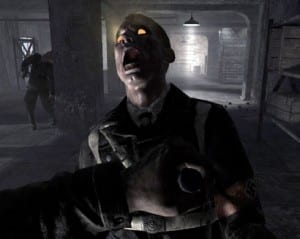 Can't have it. Says Infinity Ward.

Robert “FourZeroTwo” Bowling, speaking with IGN, said when this Spring’s “Modern Warfare 2” downloadable content rolls out, zombies will not be included.

“There will be no Nazis or zombies in any piece of Modern Warfare 2 downloadable content,” Bowling adamantly stated at a “Modern Warfare 2” tournament last weekend.

So guys and girls, let’s put those Zombie inklings to rest and gear up for whatever Infinity Ward decides to offer as DLC this spring. What do you want? More maps? More unlockables? I want both.