Mega-video game retailer GameStop recently launched a national TV ad campaign proclaiming the “biggest trade event ever” and it’s certainly hard to disagree with them as the company is offering a whopping 50% trade-in bonus on your rusty old games. 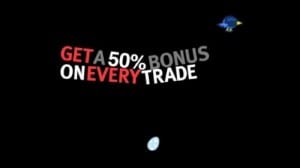 Famous for offering consumers jack-squat for their games, this promotion buffs that threshold to the “almost certainly worth it” level. Now, that copy of NHL ’07 still won’t get you anything to brag about, but if you’ve got some newer games you want to get rid of, now is absolutely the time to do so.

Looks like games like Modern Warfare 2, BioShock 2, New Super Mario Bros. Wii will each earn you $35 in credit (before Edge Card) and Mass Effect 2 at an amazing $52 before Edge Card. Pretty great, huh?

The trade-in promotion ends March 14, so if you want these resale values, beat those games quick and trade ’em in.

For more, including fine print and the like, check out the promotion’s GameStop page.