Despite its age, Zynga Games’ Farmville, the Facebook game we love to hate and hate to love, is nearing 80 million users and setting its eyes on total world domination.

New statistics from AllFacebook.com indicate that Farmville is “about to surpass” 80 million monthly unique users, which represents a 10 million user growth from December numbers.

The surge in popularity can likely be attributed to the growing Facebook popular (over 400 million) and the game’s recent Haiti relief in-game effort as well as its Valentine’s Day shebang.

Additionally, according to AllFacebook, of the 200 million that log in to Facebook every day, 15 percent play Farmville. Wow. 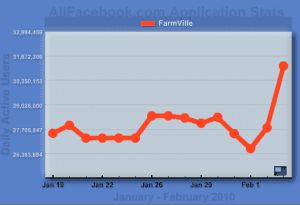 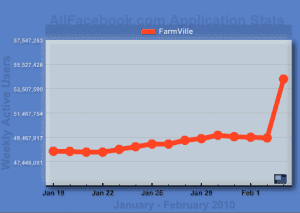