Electronic Arts clearly want a war, as the publisher today said none can compete with what it offers in terms of online multiplayer, including Call of Duty developers Treyarch and Infinity Ward. 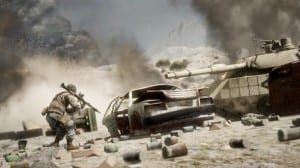 That’s a pretty bold statement, but EA DICE, developer of the storied Battlefield series, certainly does have a history of excellence to back it up.

“DICE is at the forefront of defining the multiplayer and online vehicle warfare space and has substantial pedigree in this area following many years of success. We genuinely believe there isn’t a developer out there that competes with DICE in this space, and Battlefield: Bad Company 2 is going cement that,” EA product manager Will Graham told industry mag MCV.

“The use of vehicles in Battlefield: Bad Company 2 sets it apart from the competition and no one else in the industry does this better.

“This is also something the core are very excited about: DICE’s history of delivering a multiplayer experience utilizing vehicles is something that sets it apart from anything else in the market. It’s also an element that fits with the increasing emphasis on multiplayer for gamers in general.”

I’ve played the crap out of the Battlefield: Bad Company 2 demo on Xbox Live and loved every second and so have millions of you, but whether that’s enough to topple the mighty Modern Warfare 2 remains to be seen.