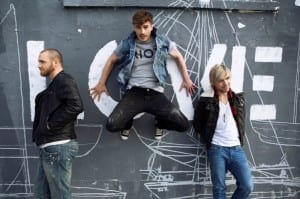 New Politics has a motto: "Fuck It."

It’s crass, and to Americans, it sounds apathetic. But for the Copenhagen-based band it doesn’t mean giving up. It means taking chances — something they do with reckless abandon. For instance, when the band was on the verge of signing with RCA in November, they realized they needed some kind of US presence. So the three musicians packed up their instruments and recording gear, said "fuck it" and moved into a loft in Williamsburg, Brooklyn.

David Boyd and S¸ren Hansen had been writing songs together for over three years (for respective solo albums that have yet to see the light of day) when they realized that they had unintentionally started a band. The pair had experimented with every imaginable style of music (every imaginable style) and suddenly recognized that the combination of their musical sensibilities, as witnessed on the 300 songs they’d penned together, created something new and interesting. Plus, the rambunctious, beat-driven nature of the songs offered Hansen a chance to "freak out and go crazy" onstage while Boyd showcased his break-dancing moves.

So the guys uttered their ubiquitous motto and haphazardly sent two songsâ€” "Stress" and "Make Money" into the Danish National Radio P3’s cleverly-titled Karriere Kanonen ("Career Cannon") competition early last year. Out of the 973 bands that entered, New Politics were one of 42 selected to perform. Except, they weren’t even really a band yet.

"They called and said â€˜Congratulations, you’re going to playing in three weeks at this club, are you ready?’" Boyd said. "And we had never played live. We had three songs. We had no drummer. We didn’t know if we wanted a bassist. We had no idea."

Do they went out and got a drummer, Poul Amaliel, and now they’re a band.

The trio became one of four bands to "win" the competition, landing them a spot playing a major music festival in Denmark last May, where they played a wild show, they said.

New Politics signed with RCA in November, did a quick UK tour, and now they’re loose in the States for a nationwide tour. We caught up with Boyd before a recent show.

DAVID BOYD: Mother’s Swedish, Dad’s American and I was born in Denmark. I’ve visited the US a few times, so for me, it’s not that much of a shock. I think I’m learned and have been able to take the best of both europe and america.

BLAST: How did the UK tour go? What’s the biggest difference between British fans and Americans?

DB: It was out of this world, we loved it. The UK was amazing and we hope to be back soon. Unfortunately, we haven’t play enough US shows to judge an American crowd… Yet! Looking forward to it though.

BLAST: How/when did you guys form up? Who are your inspirations?

DB: Soren and I have been writing and producing for about four years and we all (three of us) formed the band exactly a year ago. We’re inspired by all the typical bands of our time, but more so by reading and experiencing things in our everyday. History, documentaries, movies etc. … Everything.

BLAST: What does “New Politics” mean? Trying to make a statement?

DB: You can interpret it as you see fit. All I know is that I see and feel it everywhere in some funny way. Our statements are in the music, whatever one makes of it.

BLAST: Are you geared up for SXSW and the debut album? How long did it take to put the album together?

DB: Hell yeah! We all are, can’t wait! We’ve been working on the album this past year, we should be releasing our first album for summer.

BLAST: What’s your favorite place to perform? Any of you ever been to Boston?

DB: Any fucking stage or crowd! We haven’t been to Boston …. hope they’re ready for us!

New Politics plays Middle East Downstairs in Cambridge on May 18. Meet them on Facebook.