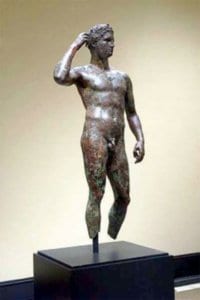 ROME — The Lysippus will return to Italy.

The statue portrays a victorious, naked and full-sized athlete and is attributed to the proto-Hellenistic sculptor Lysippus. Bought in 1977, the statue is currently on exhibit at the Getty Museum in Malibu, California.

The story of this ancient statue is complicated. From the Greek mainland the Athlete, for mysterious reasons, ended up in the sea and was pulled out of the water in 1964 off Fano by fishermen who found it entangled in their nets. Carried to shore, the ship owner buried the statue to hide it from customs officers. Sold for three million Lire to an antique dealer from Gubbio, the Athlete exchanged hands many times between Milan, Brazil and Munich and was eventually bought by the museum in California.

Francesco Rutelli, Minister of National Heritage for the last Prodi government, had entered an agreement in September 2007 with the Getty Museum, allowing dozens of masterpieces to return to Italy. At the end of that year, for example, the Venus of Morgantina was returned to Sicily.

In 2007, the Getty Museum returned many works of art, but not the Athlete. In recent days a judge decided that the Lysippus to must return to the country where it was found.