The mobile landscape is officially a three horse race between Apple, Google and Microsoft. Despite Microsoft entering the mobile game three years after Apple, the Windows Phone 7 Series, revealed today at the Mobile World Conference in Barcelona, looks like a beast.

iPhone users should and will welcome Microsoft’s new foray into mobile communications. Why? Because anyone who has seen a hacked/jailbroke iPhone knows how cool the device can be, and by comparison, how stagnant Apple’s desire to have complete autonomy over how people use their iPhones has made them. The Windows Phone 7 Series really feels like a computer that just happens to make calls and fits in your pocket. Apple will likely reveal the new iteration of the iPhone in June. Maybe by then they will have realized that the mobile world is changing rapidly and that staying relevant means treating their mobile phone as a small computer, not a smartphone. Hopefully, they will have implemented this change in ideology into the iPhone 4G.

Apple’s iPhone developers need to address some of the problems that the Windows Phone 7 Series conquers, such as stepping up the UI, allowing multiple applications to run at once, giving users the ability to download and implement web applications, and engineering seamless integration and less rigidity between phone, browsing, and social media hubs. Apple still has a huge advantage in the mobile market, but the gap was at least somewhat diminished today with the release of the Windows Phone 7 Series. 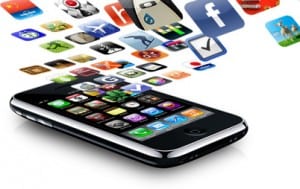 Mid February is a prime time for a winter weekend getaway, and for many New Englanders, that means hitting the mountains for some skiing and boarding. Between travel, accommodations, rentals and lift passes, everyone wants to maximize his or her time on the slopes while there. This winter, many will turn to iPhone apps for this purpose. Blast gives you the four best free apps for hitting the slopes:

The North Face Snow Report –– This app favors function over flashiness, simply giving users need-to-know information to make their trip as pleasant as possible. The app provides 24-, 48- and 72-hour snowfall conditions, trail maps and avalanche advisories. It also has a locate function to get you to the mountain and a unique resort specific Twitter feed, allowing the user to read and post tweets related to the mountain.

The Ski Computer — A handy app if you’re interested in the statistics of your riding. The Ski Computer calculates current, average and maximum ski per run, elevation, number of runs and distance per run. In addition to geotagging all the photos you take while on the mountain so you know exactly where you took them, it allows you to upload your trip in a file to EveryTrail.com, a trip sharing community.

iTrailMap — The best free app for avoiding lugging around a cumbersome trail map all day, the app contains high-resolution trail maps of over 750 resorts. With the knowledge that it can be hard to get service high in the alpines, iTrailMap downloads and stores the maps on your iPhone, eliminating the need for wireless service at all times.

Phresheez i– This app also features riding statistics such as speed, steepness, and maximum speed. Phresheez is unique, however, in that it addresses the problem of meeting up with friends on the slopes by tracking all the members of your riding party and where they are in relation to you on the mountain. The app also allows you to share your day on Facebook and Twitter.