Team Bondi’s 1940s open-world game L.A. Noire is apparently one of Rockstar’s “most ambitious” titles to date. That’s a heck of a statement to make, but today we’re given the first-ever look into the world of the game. 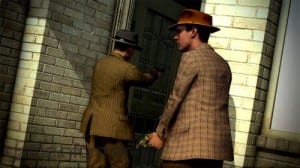 Thanks to exclusive shots given to GameInformer we see just how colorful the 1940s can be.

L.A. Noire does not use Rockstar’s RAGE engine, instead employing Team Bondi’s proprietary engine to render hit detection and the like.

We won’t steal GameInformer’s thunder and post the shots here, so hop over to GameInformer to see the handful of images from L.A. Noire and check out the latest issue of GI for a full story on the game.