Capcom today revealed its plans to bring Street Fighter IV to Apple portables the iPhone and iPod Touch in the form of a scaled down yet ambitious handheld project.

The game will use a programmable virtual fight stick (imaged below), character models from the console version will be appear in the portable game (though scaled down, obviously) and each character will have his or her own complete moveset.

The screenshot below shows off Ken and Ryu going at it and looking quite impressive doing so actually. 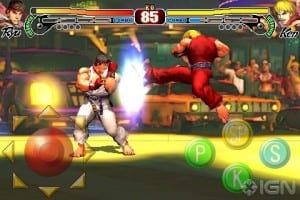 I’m definitely skeptical about Capcom’s ability to pull of fun and workable controls, and seeing this as more than a quick cash tie in, but hey, prove me wrong!