If there was one word to describe developer Paon’s turn-based RPG, Glory of Heracles, that word would be â€˜average’. Released on January 19, 2010 on the Nintendo DS, Glory of Heracles combines classic turn-based RPG elements and stylus-based mini-games with an average story. Set in ancient Greece where the Gods of Olympus rule, Glory of Heracles begins with an amnesiac hero waking up on a beach. He wanders for a bit until he meets Leucos, an immortal boy(?) who joins your quest to find out who you are. It is quickly assumed by some helpful wood nymphs that you are Heracles, an immortal gifted with the powers of the Gods. But are you really? Along the way you’ll meet some interesting (and clich©) party members willing to help you, portrayed by 2-D sprites. Thus begins your average quest.

Although Glory of Heracles is by no means a bad game, it is by no means a good game either. In fact, while playing through the slow progression of the story, I felt rather indifferent about what happened to my party, especially because the battles were excruciatingly easy. In fact, if you ever get bored of tapping â€˜attack’, the game features an auto-pilot mode that allows you to sit back and watch your party do all the work themselves. However, Glory of Heracles does a few interesting things to keep the player amused. 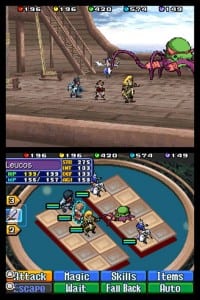 Like many other classic RPGs, almost everything is upgradeable; even the magic the party uses. Using the stylus, players can â€˜boost’ their magic by playing a series of mini-games during battle, including touching the center of a circle or hitting buttons in the correct order. There’s a lot of equipment to be had, all of which can be upgraded, and the game even has the option to polish rusty equipment to raise its stats. The battle system is fairly easy to learn and the tutorials do a great job of showing you how it’s doneâ€¦ which is good because this game has a literal ton of random battles. We’re talking one every few steps. A few hours in, the party faces immortal enemies, which then makes your battles slow on top of plentiful. It’s a good thing battles are easy, right? 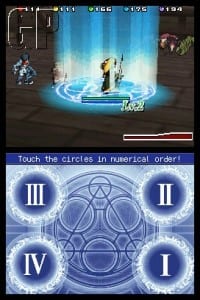 The dungeons and towns in this game are bland and repetitive, and although Heracles attempts to combine 3-D backdrops (which have some amazing camera-angles, by the wayâ€¦) with their classic 2-D sprites, the Nintendo
DS’s limited graphic capabilities make it look rough and ragged. Glory of Heracles, although it can run a player 20+ hours, works its way through the story slowly. The pacing seems off, even making the dramatic climax of the epic less dramatic and more inevitable. Essentially, after the fourth or fifth ship ride to one of three continents, the player will most likely just want to end the story and get on with their lives.

Blast Factor: The gameplay is standard and will probably keep you entertained for a bit. Hard-core RPG fans will most likely enjoy this game more than the average gamer, but it still leaves the player with a sense of indifference. The setting of Ancient Greece is a nice change from most other RPGs, and the game uses many classic elements that are wonderfully nostalgic, but it still doesn’t save the game from still being just average. If you can stand the slow story progression and plentiful battles, the game is at least worth taking a look at.

Glory of Heracles is available exclusively for the Nintendo DS and DSi, and retails for $34.99. A copy of this game was given to us by the publisher for reviewing purposes.