Revealed at Microsoft’s X10 event this afternoon was a August 31 release date for Dead Rising 2, but for Xbox 360 owners, that date isn’t exactly correct.

A Xbox Live exclusive prologue will come to Xbox 360 gamers before the full retail game hits shelves. It’s called Dead Rising: Case Zero and will bridge the gap between Dead Rising and Dead Rising 2 by filling gamers in on all the likely grisly details about how Frank West got from here to there. 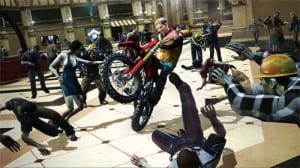 No word on how far much Case Zero will arrive before the full-game does, or pricing, or what you’ll do in it, but expect those details to trickle out.

The game is believed to no longer be an Xbox 360 system-exclusive. When official word arrives, we’ll update the story, but for now, PS3 fans, warm up those chainsaws because it’s killing time!